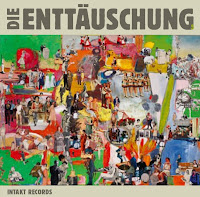 The Berliner band "Die Enttäuschung" started by re-packaging Monk in a more modern outfit, adding the learnings of Ornette Coleman, Don Cherry and later free jazz icons to the music. Today, the band composes its own music, yet in the same style, playing with rhythms and melodies, building themes and deconstructing them in pieces which are in essence too short to allow for long developments and elaboration. And this adds to the challenge and the fun. It swings, it bops, and it colors outside of the lines. Now, for their fifth release, the quartet is still as enthusiastic and cohesive as they were fifteen years ago. And the band is still the same : Axel Dörner on trumpet, Rudi Mahall on bass clarinet, Jan Roder on bass, and Uli Jennessen on drums. Four stellar musicians who make this project more than just an exercise in style, even if it is far more "traditional" than their other, more artistic endeavours.

Because all their albums are released without titles and because the art work has kept its collage style over the years, it is hard to assess what their real discography is or what the actual number of the album is.

Here is what I puzzled together, but I might be wrong (please correct if needed!):

The music sounds great, now to get hold of it from somewhere as it seems they don't exactly sell their music on the high street ........!

joesh -- you can buy direct from the label at www.intaktrec.ch although I bought mine from www.jazzloft.com