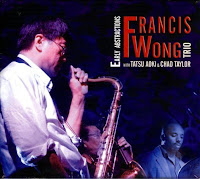 Although tenor saxophonist is based in San Francisco, and co-founder of the Asian Improv label, his musical style is very "Chicagoan", with a rhythmic phrasing that is at times reminiscent of Fred Anderson (in the rhythmic parts), sometimes of Joe McPhee (in the spiritual moments). On this trio he is also accompanied by two musicians from the windy city : Tatsu Aoki on bass and Chad Taylor on drums. The live performance was recorded in July 2008, at the1st International Animated Film Festival "Animator", in Poznan, Poland. Aoki, who is also a film-maker was member of the jury of the film festival and the trio was asked to musically accompany an movie by American avant-garde filmmaker and painter Harry Smith (who I had never heard of before).

The music on the album is a great trio outing, with  improvisations flowing freely and melodically over a very rhythmic backbone. Wong is very lyrical, warm and expressive on tenor, without going over the top, and rarely overblowing. Aoki is in absolute stellar form, and so is Taylor, both adding complexities to fun, entertainment to forward drive. On "Taylorism", the drummer gets the lead, and "Swing for Tatsu", is indeed what it says, with bluesy scales and with a powerful finger-snapping walking-bass line. Wong's Asian influences enter the improvisation from time to time, especially in the improvised theme in "Return To Alishan". The most beautiful piece is the long "The Animator Suite", which possibly because of its more open-ended nature offers more options to improvise on for all three musicians: Wong sensitive, Aoki heart-rending on arco, Taylor subtle and creative.

Not a ground-breaking album, but in every respect an accessible and great performance, and with an audience that is listening attentively and reacting appropriately.
© stef
Stef on Tuesday, February 02, 2010
Share