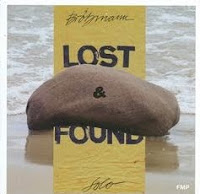 Although I have never been a real fan of Peter Brötzmann, his new solo album is worthy of mention. He has released solo recordings before, and they have that additional quality of vulnerability that is often absent from his recordings with bands, in which his muscular and physical attitude to the saxophone dominates the music, expressing distress, anger, rage, violence and sometimes even a touch of madness in its uncompromising approach. This album has some of it, but it's also sensitive at times, not sweet, but an acceptance of smallness, of someone alone in empty space, the opposite of the unrelenting blowing with his bands that leaves no second of chance to silence. In the title track "Lost & Found", he is even melodious and lyrical, wailing full of sadness, then slowing down and reducing his volume as if in full resignation. For Brötzmann fans, the next piece "Universal Madness", finds him again in full steam for some seven minutes of power blowing, evolving over the whole register of his instrument, from the low to the very high, but never letting off steam, not until the very end of the piece, when his tone softens again. Deliberate or not, all pieces, despite the violence and the rage they express, end in a slow and sensitive and soft-tone voice, mirroring the album's title.

He can not only shout, he can weep too.

Brötzmann plays alto and tenor saxophone, b-flat clarinet and tarogato. The performance was recorded live on July 14th, 2006 a the Jazzgalerie in Nickelsdorf, Germany.

FMP celebrated its 40th anniversary last year, quite a feat for a label that is specialised in anything non-commercial. Brötzmann was with them from the very beginning in 1969. That's also an achievement.