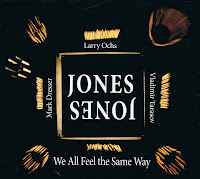 When three veterans of the avant-jazz scene meet for a fully improvised performance, you know that sparkles will fly, as they do on this album. The trio is Mark Dresser on bass, Larry Ochs on tenor and sopranino, and Vladimir Tarasov on percussion. The album brings two sessions together : one at the Bimhuis in Amsterdam, The Netherlands, and the other in St. Petersburg, Russia, both with a few days difference in June 2008.

The music is, as you can imagine, very much an open exploration of sounds and intensity, with long sequences of short bursts and meandering phrases, all at a level above repetitiveness, in the somewhat raw and abstract regions of music, but full of soul at the same time. There are moments on the album when the mind starts wandering, because at times the music all very much within an identical range of action (but then I'm also tired and that may be the reason), and yet, then you get this piercing bow from Dresser or this yearning tonal bend from Ochs, or a sharp rim-shot from Tarasov, and you're back in the game. And that game is playful, evolving, ever-changing in its color and emotional load. Listen for instance on the clip below, how the music changes from a vertical sense of agitated nervousness (the beginning), over distress (as of the fourth minute), to sensitive sadness (around the fifth minute), and ending in resignation. True, it is sound exploration, but more than that. For these three musicians it is all about exploring emotions first and foremost.