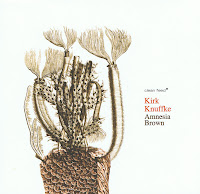 I already showed my appreciation for trumpeter Kirk Knuffke before (here, here, here, and here), and he keeps improving. His new album brings him in the company of Doug Wieselman on clarinet and guitar, and Kenny Wollesen on drums, both quite known from their work on Tzadik and other "downtown" bands. Knuffke's music is hard to name: it's composed, yet full of free improvisation. It is incredibly rhythmic, it is melodic, yet full of surprises and curious bends. It is sweet at moments, like the last track "Anne", which is full of sentiment and love, but abrasive at others, like the last-but-one piece "Please Help, Please Give". The switch between both extremes is often the result of which instrument Wieselman uses. His clarinet playing is full of lyricism, his guitar playing full of skronk. The alternation between both is a great idea, because it adds to the huge variation you get on the album. Wollesen's drumming is brilliant : his rhythmic inventiveness is an absolute pleasure to hear, and by itself already worth the purchase of the album.

Knuffke's tone is warm and subtle, full of emotional power, somewhat comparable to Dennis González, and his technical skills are excellent. He takes the most difficult parts with ease. The first track is a good example of that : "How It Goes", starts with a great long unison theme, after which his improvisation on the theme drives it higher with strong rhythmic pulse, wonderfully accompanied by Wollesen. The compositions are short, most clocking around three minutes, which forces the musicians to be compact and to-the-point in their improvisations. The pieces are fun, clever and full of emotional power, yet also headstrong and wayward, and with more ideas in one album than you sometimes get from other musicians' entire discography. Some of the themes, like the one for the title track, or of "Leadbelly", keep playing in your head long after you've stopped listening to the album, other pieces require repeated listens before you really get into them.

The album's greatest quality is its incredible power to say a lot in a few notes. It is very creative, and it swings from beginning to end. This is one of those albums that you want to keep listening to. What a joy!