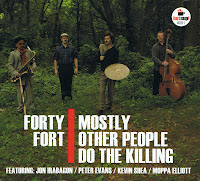 I did not want to write about this band until I saw them, which was last night. It is fun, it is virtuoso fun, full of drive, full of wildness, full of discipline ... They build on themes reminiscent from early Dixieland swing and bop and everything in between, including blues, but then the whole thing collapses, or unravels into undiscernable layers of sound in the best free jazz sense just to shift back into the same theme, or another, in another tempo, another rhythm, as if there was nothing easier in the world to do. It is crazy, it is wild, it is exhilarating.

You all know the band in the meantime : Moppa Elliott on bass, Peter Evans on trumpet, Jon Irabagon on sax,  and Kevin Shea on drums. All strong players, with Evans being technically astonishing. The band's explicit mission is to bring "fun" back in jazz, and they succeed: it is a highly entertaining album. It was a highly entertaining concert. But that's also a little bit its downside : it's entertainment of the highest level, but only entertainment.