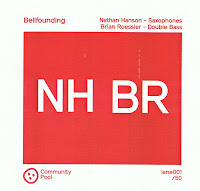 Nathan Hanson on sax and Brian Roessler on bass are one half of the Fantastic Merlins quartet, a band that mixes jazz with chamber music and prog rock influences. Here, they are pure jazz, in a nice and sweet dialogue, never too brash, never too mellow. Most tracks are improvised duets, with the exception of Ayler's "Bells", a piece that inspired the title of the album. The musicians' original intension with a release on fifty copies was to restore the value of an album, in stark contrast to the zillions of mp3 formats that circulate and that nobody even ever listens to. This attitude also reflects their tone and style : unhurried, precise, calm, warm, intimate, tender. The downside of the approach is that, because they shy away from the extremes, the music lacks some character and personal voice.

And despite their intention, the album is now available for download in mp3 format. Whether you want to or not, you eventually get sucked up by the maelstrom out there. 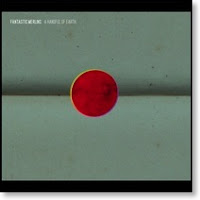 On their second album, the Fantastic Merlins make a jump forward, as they say themselves, in my opinion moving away from just "mood" music, into a more composed environment that brings them closer to prog rock attitudes or in the zone that bands like the Penguin Café Orchestra explored. Jacqueline Ultan is still on cello and the drummer is now Peter Henning, replacing Federico Ughi, who went back to Italy to live in Rome. The music has lost a little bit of its free drive, becoming more groove-based and less exploratory. Despite the obvious quality of the compositions and the inventiveness in the arrangements, for me the lack of raw expression makes this album too gentle. Yes, it is a little menacing at times, yes, sometimes they resort to a powerful forward drive, yet it remains too measured and controlled to please me. But that was surely not their intention.