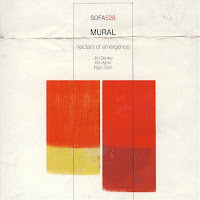 That minimalism is not always a recipe for boring music, is wonderfully demonstrated by this fantastic album by Australian Jim Denley on alto saxophone and flutes, and Norwegians Kim Myhr on acoustic guitars, and Ingar Zach on percussion. The music is very pure in its unobtrusiveness, but keeps away from the exalted states of new age. Despite its lightness of texture and open-ended improvisations, there is a dark undertone, a menacing tension that gives the music its incredible power. Less is more, and these three artists deliver the goods. It is not always clear which instrument makes which sound, but that is totally irrelevant. What counts is the sound itself, how it's folded around the silence, how it makes the environment vibrate, how it builds substance out of the almost non-existent. On the longest piece, "Flash Expansion", a rhythmically and slowly strummed guitar chord forms the backdrop for a slow evolution of increasingly agonizing and gloomy sounds, which in turn develops into squeezed-out sax sounds over a dark rumbling. You do not know what is going on, or even how to possibly interpret it, but it is a fascinating listening experience. Denley's saxophones and flute reduce music back to its pristine original nature of vibrating air, Zach's use of percussion has a precision which is unequalled in building a sonic scene (just listen to his dark and hypnotic bells on the first track), and I have rarely heard a guitarist like Myhr, with a sound so sparse, so contained, yet equally telling more with a few chords than many others cannot create out of a zillion notes. Needless to say, this is highly recommended.

Related albums are Panopticon and Dans Les Arbres, both with Ingar Zach. 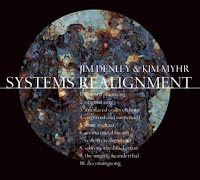 The Australian flutist and the Norwegian guitarist released another album last year, which is more electro-acoustic in nature. It is a little more complex in its texture and rhythms, but also less powerful in its overall sonic result.

Listen and buy from either/OAR.