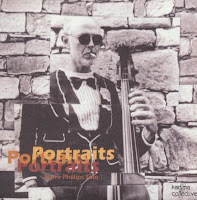 For his 75th birthday, Barre Phillips revisits his own concept of the solo bass album, which started in 1968 with Journal Violone. The album brings five disciplined, controlled and careful improvisations. Phillips is not noisy, he is not atonal, he does not use extended techniques, he is not about muscularity. He is all about tonal timbre, about focused freedom, about discovery and expansion of ideas in new forms, yet developed within a coherent set of possibilities.On the second piece, "The Dream", his powerful bowed intro is subtle and restrained, evolving into a hypnotic rhythmic pattern of bowed and plucked strings, but it's on "Up And Out", that the lyricism becomes more explicit, combining light-footedness in combination with the instrument's deep sense of drama, and his skills are such that he can do that simultaneously : impressive. The last, and the most accessible piece, is full of warmth and soul, full of gentleness and optimism, an adequate ending of a heartfelt performance.

The concert was recorded in 2001 in Graz, Austria, in front of an enthusiastic and listening audience.

Listen and buy from CDBaby