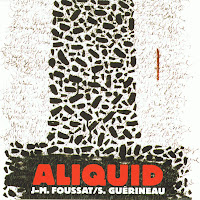 Most albums with electronics have the tendency to work on my nerves more than anything else. So does this albums at moments, but you (I) need some courage to go beyond these first prejudices and to keep listening, because it leads to some rewarding moments.Yes, I was irritated at times by the a-musical sound of the analog synthesizer, by its industrial hardness, or its cheap 70s sci-fi television series imitation. But once you go beyond this layer, the end result is often quite powerful, and to a large extent the result of Guérineau's creativity and emotional power on tenor, driven forward by the electronics and forced to go beyond its natural language. So do the live electronics, building on the sax sounds, replaying them, altered, in loops, darkened, lowered, distorted, .... creating sonic nightmares, often in the background, sometimes agonizingly piercing its way to the forefront. It is weird stuff, not always easy to categorise, not easy to fathom either, but nonetheless, adventurous in a world I would not naturally go myself. Thanks for bringing me out there. It was worth the journey. 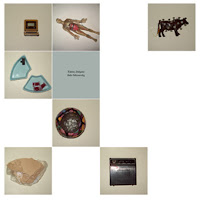 In a more minimalistic setting, Greek musicians Tasos Stamou on a variety of objects and electronics, and Ilan Manouach on soprano and sopranino sax, bring music of a weird beauty. The sounds of the objects create a repetitive pattern as the slow and almost inobtrusive background, over which the sax blows sound ripples, repetitive and moving outward. The whole thing becomes quite hypnotic, drone-like, but it has an inherent musicality that is usually lacking in the genre. The soprano does come across quite discernably, and it sings beautifully, often as a shining light in a dark electronic universe. At other times it conjures up images of endless agony from which there is no escape possible. Either way, it won't leave you indifferent ... and the album ends with some shamanistic flute-playing. Intriguing.

Are you familiar with George Lewis - Homage to Charles Parker and with his recent album with Muhal Richard Abrams and Roscoe Mitchell (streaming)?