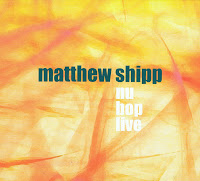 The quality of an authentic artist is the relentless search for new forms of expression, something that will say more, or different things, and which cannot be said with the current tools of the trade. This includes taking risks, risks of alienating audiences, but also the opportunity to open new horizons for musicians and listeners alike.

Matthew Shipp is such an authentic artist, even as a solo performer on piano, but even more so with his various bands, with traditional and less traditional line-ups. His "Nu Bop" band is somewhere in the middle, merging free jazz with electronics, lyricism with dissonance, composition with free improvisation. The band is one of the best around, with Daniel Carter on sax, William Parker on bass, and Guillermo E. Brown on drums and electronics. Three of the six tracks on this live album also appeared on the studio version dating from 2004: "Nu Bop", "Rocket Shipp", and "Nu Abstract", with the latter taking up half the performance, but the compositions get a totally different approach and delivery, more direct and less "manipulated" than the studio album.

The album starts with "Nu Bop",with an expressionist piano intro. When Carter joins, he seems to be playing in a different piece, against the rhythm and the composition's feel, slow and detached against the powerful drive of the rhythm section. But then he almost literally gets sucked up in their maelstrom, blowing fully integrated and in sync, just to detach himself again later. "From The Otherside Of Anywhere" is an eight minute long drum improvisation by Brown, and although I'm not a fan of drum solos, this one is worth listening to attentively.

The pièce-de-résistance is of course "Nu Abstract", which gives Shipp himself ample space to improvise and show his talent on the piano. It starts eery and impressionistic, only supported by Brown's percussion and electronics. Parker joins on arco, to add shade and depth, and after a while Carter enters too, but still on the background, increasing the intensity, equally abstract and without form, until Shipp takes the band with some low pounding chords into the same momentum, driving them forward hard, then releasing the tension until only fragile vulnerability remains. This shift between power and sensitivity, between density and lightness of texture repeats itself a few times, varying in delivery between harmonic and dissonant, with Carter absolutely stunning toward the end of the piece.

The last piece, "Virgin Complex", earlier to be heard on "Harmony & Abyss", again shows Shipp's lyricism at his best: a hypnotic theme forms the basis for an arco improvisation by Parker, over which Carter weaves a beautiful solo, functionally supported by Brown, together slowing down and phasing out.

Listen to an excerpt from Virgin Complex

Not a single sound sample on the entire web? Can't be true, but I didn't find anything.
Even the record label doesn't have a homepage?

I added an excerpt so that you can get an idea of what it sounds like.

Thank you very much, Stef!

Wow, that sample is great. Thanks! The bass and sax play off each other really nicely there.