Saxophonist Sabir Mateen is one of those musicians who have been playing free jazz since the seventies, playing with all the icons of the genre such as Cecil Taylor, William Parker, Daniel Carter, Steve Swell and Frode Gjerstad, to name just a few. With the latter two he recorded a new album on Not Two, and a solo album on RogueArt. He is a frequent player in the free jazz mini big bands, like the Little Huey Orchestra, Gjerstad's Circulasione Totale, and Earth People. 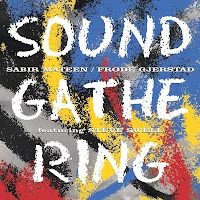 On this album, Sabire Mateen is co-leader with Norwegian saxophonist Frode Gjerstad, and with Steve Swell on trombone, Clif Jackson on bass and David Gould on drums. On the long first track, Swell's trombone is one of the strongest voice, both in volume and presence, wailing in all emotional registers, from distress to sadness, with the two saxes adding appropriate background support, but the piece becomes strongest when the saxes do their solo-thing. Otherwise there are lots of dialogues and trialogues, and as the title of the album indicates, this is more about sound that about lyricism. That changes with the second piece, when Mateen picks up his flute for a hesitant, almost fragile slowly moving forward tune. With the third piece we're back in high intensity territory, a kind of jubilant blowing fest. You get the gist: wild interaction reigns, lots of dense interplay, but in my opinion a little lacking in focus and real musical vision.

Recorded live on October 11, 2008 at URDLA in Vileurbanne, France, Mateen brings this wonderful solo album. To my knowledge this is his first, but I may be wrong. After listening to "Sound Gathering", this album is absolutely refreshing : it is sober, calm, yet captivating. He begins with some African (?) chants, entering from the dark depths of the stage, approaching the mikes, an incantation that sets the scene for two alto clarinet pieces. "Music is Sound" is a hard to understand poem, accompanied by rattling bells, but the key message is "life is music, music is life, everything is music, music is nothing but sound", a call to action for the alto saxophone, urgent, full of distress and squeezed notes. "One For The Road" is a bluesy piece, in contrast to the previous "Sekasso Blues". "More Than A Hammer" is quite melodic and rhythmic, and increasingly so the last piece "Blessing To You". A nice and welcome solo album, showing a different side of the musician, but one of equal value.

I recently came across your blog and have been reading along. I thought I would leave my first comment. I dont know what to say except that I have enjoyed reading. Nice blog. I will keep visiting this blog very often.