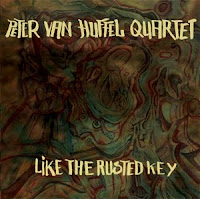 I saw this young quartet perform in less than optimal circumstances, in a pub with over two hundred students totally uninterested in the band performing, probably considering them nothing more than background noise to their chats. The four musicians are Berlin-based Canadian altoist Peter Van Huffel, pianist Jesse Stacken, bassist Miles Perkin and drummer Samuel Rohrer, and all four extremely rich in their skills and versatility. They feel as easily at home in pieces with composed themes as they are on total improvisations. "Drift" starts hesitatingly but evolves into a nice theme and strong improvisations, "Tangent" has a great rhythmic drive, a strong unison theme, allowing for great staccato accentuations, then stopping abruptly for an alto solo intermezzo that tears the piece to pieces, and even if the band re-joins, it does seem to get off the ground again, but of course the great theme builds up momentum again to come to its finale. "Enghavevej" is more joyful, "Excerpt Two" is more minimalist, "Backward Momentum" another beauty of composed interplay, "Melancholic" is driven by the slowest piano chord progression ever heard, making it fun and sensitive at the same time, "Beast II" is dark and menacing. The compositions are strong, the voices rich, the sound pallette broad and deep. This music goes well beyond mainstream because of its sometimes raw delivery, wild improvisations, deconstructionist attitude, but the careful attention to themes, structures and arrangement keep the music relatively accessible. This is clever and intense music.