The two faces of Natsuki Tamura

Japanese trumpeter Natsuki Tamura is a person with many aspects, including the two faces of two of his new albums. He can be very sweet, harmonic and gentle, as on with his Gato Libre band, but he can also be the wild adventurer, who dives deep into sounds and noise that was rarely heard before. 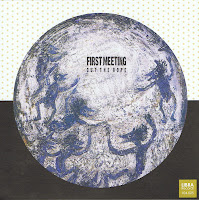 First Meeting was created for this performance, although the band had a concept before they started playing. As Tamura writes in the liner notes : "We are definitely about noise, so there is plenty of BUSHAA, GUSHAA, GIGIGI, and GOBOGOBO for some time. But there are also a variety of beats, and even the occasional lovely harmony or melody". To avoid misunderstanding : the words in capitals are not samurai techniques, but sound imitations. The band consists of Natsuki Tamura on trumpet, Satoko Fujii on piano, Kelly Churko on guitar and Tatsuhisa Yamamoto on drums. Thte title track is wild and unrelenting noise, evolving from utter chaos towards an increasing intensity of such a level that it becomes strangely compelling. The second piece starts very minimalistic, with zen-like little sounds breaking the silence, evolving into a chatter of abrasive and scratching sounds, like some kind of rusty industrial machinery that has not been used for decades let alone oiled, coming back to live (by itself) and going totally haywire, but then it is calmed down by soothing tones of both piano and guitar. And indeed, this duality between attraction and repulsion, between familiarity and utterly new sonic experience works well, also on the other tracks, of which some even have melodic and also rhythmic moments.

Weird, strange things happen here, but they are worth listening to.This is the kind of music that I would have found horrible five years ago, but either my senses have become dull because of listening too much, or to the contrary more discerning. Anyway, it is great stuff for people with very open ears. Keep listening! It does not reach the level of his "Hada Hada" (I keep mentioning this album, I should review it once), but I love it. 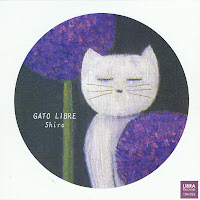 Gato Libre is Tamura's incredibly powerful fusion between Spanish, Middle Eastern and European folk with jazz. In contrast to First Meeting, this is all about melody, harmony and traditional instrumental expressivity. With several unbelievable strengths : all the original compositions are of a sensitive, sweet and aesthetic beauty, and the delivery is absolutely stellar. Natsuki Tamura's trumpet is rich and expressive, full of melancholy and yearning, Satoko Fujii's accordion gives the right tonal background and precise touches, Kazuhiko Tsumura's acoustic guitar adds the sad and vigorous Spanish flavor and rhythm, and it is the perfect companion for trumpet and bass for the long unison phrases. Norikatsu Koreyasu's bass is always quite functional effective, yet more often than not adds the depth and warmth this music requires. Despite the more traditional approach, the warmth and cuddly factor, some of the pieces have sharp claws and long fangs. It is no surprise that the band is called Gato Libre, the "free cat".

This is world jazz at its best. It is not boundary breaking, but in its naive simplicity and traditional beauty, it is without a doubt the absolute best in the genre. The themes will keep playing in your head long after you've stopped listening to the album, and when you listen to it, again and again, you can only marvel at the precision and power of the performance.

And a kind of musical blend that you would not expect from a Japanese band, but then again, the world is our place, belonging to all of us. 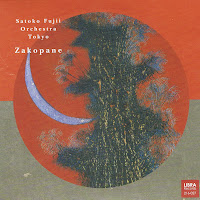 If there is one contemporary musician that I hold in extremely high esteem, it's Japanese composer and pianist Satoko Fujii. As the uncivilised person that I am, I once told her that I did not really like her big band performances, while I forgot to mention that I do not like big band at all, with a few exceptions. My apologies for that.

For that reason I will not review this album, but I can recommend it to lovers of big band.

Satoko Fujii is the best!