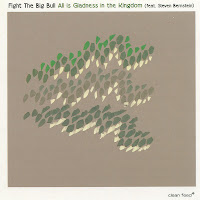 I am not a fan of big bands, even small big bands, yet there are some exceptions. Some of Charlie Haden's albums for instance, or Carla Bley's. And this one : Fight The Big Bull. The Band started with an excellent, but all too short "Dying Will Be Easy", also on Clean Feed, two years ago. For their second album, Fight The Big Bull, led by guitarist Matt White, is a little more expanded. The band consists of Jason Scott, JC Kuhl and John Lilley on reeds, Bob Millier on trumpet, Reggie Pace and Bryan Hooten on trombone, Cameron Ralston on bass, Brian Jones and Pinson Chanselle on percussion. Eddie Prendergast joins on electric bass on one track. The featured guest star, composer and arranger is trumpeter Steven Bernstein, known from his work on Tzadik, the Sex Mob, MOT.

On the upside, Bernstein is a great slide trumpeter and arranger.

On the downside, it gives the album the same distant veneer of all Bernstein's work : great exercises in style and genre, with lots of attention to the entertainment factor and a demonstration of prowess that basically drowns feeling and authenticity.

The first album lacked some of the complexity of this one, but it was so heart-rending, authentic and majestic, full of dark drama, tragedy and deep-felt anger, whereas here, the element of distant playfulness is introduced, and it reduces the listening experience to something more middle-of-the-road. The band is still great, the playing good, but the end result is less compelling. I wish they had continued their original concept.