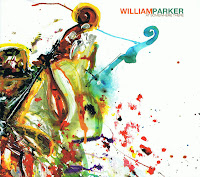 This is certainly not William Parker's first solo album, he already released "Lifting The Sanctions", "Testimony" and "Painter's Autumn", but this is the first one on which he doesn't play pizzicato, using his bow for the first and lengthy track, called "Cathedral Wisdom Light", on which he demonstrates the unbelievable riches that are hidden in his instrument : from the cry of whales to those of birds, over the pulsing or a heart, or just bone-chilling shrieks. He goes deep here, moving into real avant-garde territory, uncompromising, full of intensity and energy, often playing on several strings at the same time in the higher tonal ranges of his instrument, giving the impression of a wild string orchestra that is playing trance-inducing improvisations. Some of it is absolutely staggering, not only technically, but especially because of its emotional power. But he is sufficiently creative to add variations and new approaches, and to be frank, I've rarely heard him play in this manner, and I have dozens of his albums.

The two other pieces are not really pieces for bass. On the second "For Don Cherry", he plays one of the late trumpeter's side instruments, the dousn'gouni, an African guitar, accompanied by his singing, showing his spiritual side and love for the world. On the last piece, "For Ella Parker", he plays double flute. Both shorter tracks are fun, but they lack the depth and power of his magnificent almost 50-minute long first track, a piece which is by-the-way perfectly expressed by the artwork of the album.

That track alone obviously makes this a very recommended album.