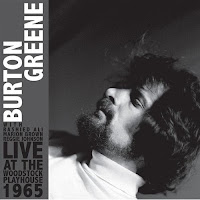 It's not really a re-issue, but the tapes of this 1965 performance were dug up and released for the first time. It gives a kind of time capsule experience of the early free jazz movement. Burton Greene was, together with Cecil Taylor, possibly one of the first pianists to move into the areas of real musical freedom. He is accompanied here by Marion Brown on alto, Reggie Johnson on bass and Rashied Ali on drums.

At the beginning, the music sounds nice and sweet, somewhat simple in its theme - despite the underlying structural complexity - and timid in its development, and the interplay is at times real awkward when you listen to it with today's ears. It sounds more post-boppish than free. The second piece is more abstract and wild, hammering down conventions and increasing the energy levels, with pockets of more intimacy in between. When Brown joins after seven minutes, his blowing adds expressive power to the piece, and is really free, followed by a long bass solo by Johnson, both pizzi and arco, and this must have been quite another ear opener in those days.

The last track is a long fully improvised piece, and without a doubt the best part of the CD. Again Greene is the leader of the improvisation, playing quite freely but still with structure and technically within the limits of the times. The same holds true for Brown, whose great sax-playing rarely ever goes into overblowing mode or other of the sounds we are now so used to. Ali's drumming suffers from the same issue, the vision was there, the skills and techniques to deliver the vision were still in full development. What must have sounded like absolute chaos to listeners fourty-five years ago, sounds quite accessible today.

Even if the music lacks in some respects if you listen to it with today's ears, it is still a wonderful insight into the work done by the "jazz soldiers", as Greene describes it in the liner notes, breaking open boundaries, limits and other constraints to lift music up to full freedom, liberating it from the shackles of tradition and the establishment.