A couple of weeks ago I was wondering why I hadn't heard from Hamid Drake in a while. The wonderful drummer has been one of my favorites for a while, just because of the soul he puts into his playing. It is hard to describe, and possibly even harder to explain, but the guy's drumkit actually lives! Just to hear him play is an absolute joy, regardless in what context. But my thoughts about him were not yet stored in the archives of my habitual stupor, or here we find him back, with two of the German grand masters of the European free improv saxophone. 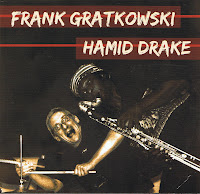 This album is absolutely exceptional. If you think that the limited line-up of sax and drums is the best recipe for boredom, think again. What you will hear on this album drags you through the musical universe of two musicians whose capabilities to interact in the moment are pretty spectacular. Gratkowski howls cries wails weeps screeches sings whistles vocalises. Drake uses his entire arsenal of polyrhythmic skills to respond, to move forward, to create together. Yet it does not stop there, Drake appears equally versatile, and how, in the more avant or free improv environment, where rhythm as such is less relevant than sound and texture, and he does so brilliantly, making rhythm omnipresent without actually playing it.

Gratkowski can be very abstract yet sensitive in his improvisations, like in the first piece, "Brother G's Walk", in which his intro is full of vocalised multiphonics, yet gradually the piece gains in intensity, with the drums shifting from accentuating cymbals to tribal drumming, pushing the sax into more fierce regions, full of agony, repeating the same phrase almost hypnotically, and Drake keeps changing rhythms, he just keeps changing the rhythm underneath Gratkowski's repetetive blowing, turning the piece into absolute funk, and the German moves along, without relinquishing his own concept, yet fully part of the fun and funk, then slowing down the volume and the number of notes, while keeping the pulse going, howling to the beat. Just staggering.

I will not even try to describe what I hear, but you get the gist : absolutely great stuff. I have the tendency to be swept away by what I hear, and I like the sax-drums format, but even then ... this is great stuff.

Although recorded live, the sound quality is excellent, as if you were sitting next to them.

Buy from Validrecords or listen and download from CDBaby. 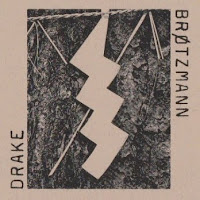 Brötzmann is another kind of musician than Gratkowski. He represents raw power and lung capacity, where the latter embodies technique and subtle creativity. On this album Brötzmann plays alto, tenor and tarogato. Brötzmann has released several sax-drums duets, with Han Bennink, with Paal Nilssen-Love, but his collaboration with Hamid Drake is possibly the longest, with their first duo album released in 1995, the famous "The Dried Rat-Dog".

On this album, the playing is relatively straight-forward, with Brötzmann setting the high energy scene from the start, then giving Drake quite some solo time, after which the German starts blowing his lungs out, ending in the higher regions of his sax.The sound quality is not always ideal, with the sax being quite distant at times. The second track is more spiritual, with slow tarogato sounds and Drake on frame drums, with at the end Brötzmann falling back on his repetitive powerplay.

The third track starts with a solo tenor for close to four minutes, then Drake joins, with rumbling sounds while Brötzmann keeps going at it, relentlessly, possibly not listening to the drummer, but then giving him some solo time again. The last track is more Ayleresque, with a kind of gospel tune or hymn going haywire, giving Brötzmann again some fierce moments, but ending in sweet softness. Drake does his best, but he is clearly pushed in a supporting role.

In sum, two totally different kind of sax-drums duos, with my obvious preference going to the first one, and with reason.

Watch a recent Brötzmann/Drake concert, quite well illustrating my point.