As a follow-up on the first "Paul Dunmall and friends" topic, here are again two noteworthy albums by the British sax-player. 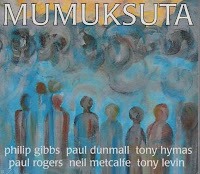 "Mumuksuta" means being totally liberated, a concept high on the agenda of this blog, and also by this British free improv sextet consisting of Philip Gibbs on guitars, Paul Dunmall on tenor & soprano saxes & clarinets, Tony Hymas on piano, Neil Metcalfe on flute, Paul Rogers on 7-string bass and Tony Levin on drums. The music by this band really floats or hovers in the air - it has done away with anchor points or other aspects of gravity and recognition. On the four lengthy tracks, called "Yearning For Freedom", "Desire To Free Oneself", "One's True Nature", "From All Bondages", the six musicians move slowly forward, quite abstractly, adding tones to tones, in duos, trios or more, shifting as they move along between line-ups, quite nervously, agitatedly, then calming down again, like leaves being blown away in a storm wind, then settling down again on the ground, to be lightly touched and lifted up again. "One's True Nature", with its heavy drumming is possibly the most jazzy tune, although the words "jazz" and "tune" seem out of place in this context. The end result is mesmerising, eery at times, and yes, somehow liberating. 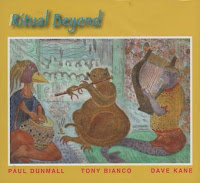 The nature of the music on this album is equally free, but where the sextet album offers free floating, this one is more about free expression, and full of fierce energy too. This energy is largely the result of the powerplay of Tony Bianco on drums, whose unrelenting pounding is taken up quite well by Dave Kane's bass. Both form an incredibly strong backbone for Dunmall's quite jazzy playing, either on bass clarinet or tenor. The trio calms down a little for the third piece, "Sarasiwati", yet not for long. Three musicians in superb doing, yet they are so prolific and their approach is often quite similar, making this album hard to recommend over previous Dunmall albums, but fun it is.