Two years ago, I gave a five-star rating to pianist Kris Davis' "Rye Eclipse", a stunning album with great musical vision. Last year, saxophonist Ingrid Laubrock's "Sleepthief" was almost as good, and with equal strong musical vision, even stronger when I saw her perform with Tom Rainey and Liam Noble. Tom Rainey is without a doubt one of the best drummers of the moment, and features on many albums reviewed on this blog. So, having these musicians release in various line-ups is a pleasure for the avant-garde jazz fan. 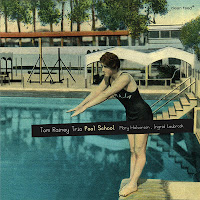 A couple of weeks after "Swedish Azz", here is another diving woman on the cover of an adventurous album.  A symbol of not being afraid to jump in the deep, not afraid of cold water? A symbol of style, practice, discipline and grace? A symbol of creating ripples on the as yet untouched surface? A metaphor of daring to take a deep dive below the surface of things?

In my humble opinion, it signifies all of them. Rainey has swum in many waters, and still does. Laubrock has evolved from mainstream and even Latin towards complete free form, with a strong emotional voice and musical vision. And Mary Halvorson on electric guitar is an acquired taste, raw and unpredictable, sometimes hesitant yet rarely less than adventurous, yes, raw and fragile is possibly the best description of her paradoxical attitude to the instrument.

On this album, the trio explores an open-ended musical universe in twelve improvisations each clocking around five minutes long. Each piece has its own character of intimate or energetic trialogue, built around each other's inventions and spur of the moment ideas, yet sufficiently focused around some central concepts to have a sense of unity. Most pieces are quite abstract, even if Laubrock uses a rare melodic phrase once in a while, as on "Crinkles", or sudden rhythmic developments that disappear as fast as they came, otherwise you get bouncing sounds, nervous reactions, sonic build-ups, often with a harsh delivery that is the result of both dissatisfaction with the present as with joy in creating something new. Creative destruction if you want. Forget about long phrases or stretched sounds, it is all about pointillistic dots, as if the guitar and the sax have turned into percussion instruments, splashing notes on the canvas. 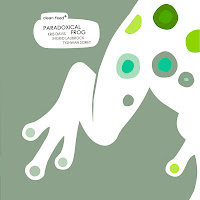 We find Ingrid Laubrock back on this other trio with Kris Davis on piano and Tyshawn Sorey on drums, another unusual trio line-up, for an album of equal quality despite its different approach. All eight tracks contain elements of composition and structure, and they are almost equally distributed among the trio : three by Davis, three by Sorey, two by Laubrock. Yet composition and structure act as footholds on an adventurous journey, the rocks which help you cross the stream.

In contrast to the Tom Rainey trio, the general nature of the music is more welcoming, more gentle, more organic in its development. The intensity can change dramatically in one and the same piece, evolving from high energy towards calm moments, yet it is the open nature of the pieces that is its strongest characteristic. Sorey's "Slow Burn" is indeed slow, with the least number of notes necessary to create a great atmosphere full of tension. The tones are stretched, and remain open, waiting for silence to evaporate them or to be replaced with new ones, quietly, slowly. On "Canines", the open nature remains, with silence dominating, fractured by some bluesy chords and incredibly sensitive blowing by Laubrock, possibly one of her biggest strengths, yet slowly a theme emerges, the tempo increases, and the piece gets some harmonic development, like a story being told. A musical story. The whole album is like this, with linear story-telling, careful attention to detail and overall effect, without falling back on easy patterns.

The biggest effect comes from the slow tension-building silences that define the overall sound : there is no hurry, the pace is measured, each note ripens fully and almost individually. The density of the album shifts repeatedly, but regardless of the moment, it is always very lyrical and with three musicians working as one on the same concept. Really great.

For those interested in the album's title : the paradoxical frog is also called the shrinking frog, because the tadpole can have three to four times the size of the adult animal.