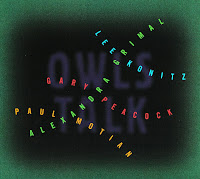 What a delight for the young French saxophonist to be the leader of a quartet with Lee Konitz on alto sax, Gary Peacock on bass and Paul Motian on drums. In contrast to her relatively wild previous album "Shape", or her more adventurous albums with "You Had Me At Hello", the playing here is quite accessible, but without being mainstream: without actual soloing, the two saxes are engaged in a continuous free dialogue of action and reaction, assent and dissent, with bass and drums feeling equally comfortable in the open musical environment. The music is extremely lyrical, very rhythmic, but without patterns or themes.

The sound quality of the recording is superb, easily illustrated by Peacock's bass on "Petit Matin", which is absolutely stunning in its sensitive subtlety, equalled by Grimaldi's soaring soprano.

Some of the more composed pieces have a more post-boppish character, and the album would have had more unity without them. That notwithstanding, and without really being adventurous, the album is a delight of intimate musical joy and interplay. 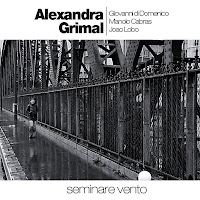 The problem of young musicians is to find a specific voice and style. Here Grimal is joined by Giovanni Di Domenico on piano, Manolo Cabras on bass, and João Lobo on drums. The music is less daring, more into the mainstream, with some pieces of extreme, almost classical beauty, like "Sans Raison", or "Saudades Correspondidas". Grimal's tonal quality is absolutely superb, but the music meanders between the beaten track and a walk in the park. It is laidback and unfortunately not very adventurous. After some of her previous albums, I would have hoped for something less safe and more daring.

Do you know when 'Seminare Vento' was recorded? Because I have a (demo) recording of this band from 2006 or maybe older which I liked very much.

No idea. I downloaded from eMusic, but they don't add the liner notes with the download, which I think is a shame.

Stef, you should maybe update the gig list sometime?

Please inform me about their schedule.

It looks like it's 15th February at the Hopper and 18th at the Sounds.