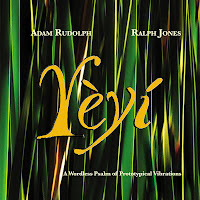 Percussionist Adam Rudolph and reedist Ralph Jones bring one long improvisation, changing instruments and tone as they move forward on their journey.

As you can imagine, the music is full of African influences, with hypnotic polyrhythms, some singing and expansive playing. Despite the limited line-up, they vary quite well between sad, joyous and spiritual moments, giving their music lots of depth.

As the liner notes comment : “Yèyi” refers to the yodeling of the Mbuti pygmies, one of the oldest indigenous people of the Kongo region of Africa. Their inspiration on the music is twofold, according to Rudolph: one is in the communal harmony with nature towards which the artists strive, and the second is in the legacy of a culture that has rippled outwards over continents and generations, through the African-American musical influences that Rudolph and Jones draw upon".

Friends, this is musical joy and authenticity from beginning to end. Simple and profound. 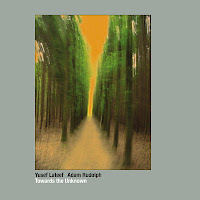 The quality and authenticity of the Rudolph and Jones album make the contrast with this album all the greater. On this album with string and horns ensemble, Rudolph and reedist Yusef Lateef each composed a concerto for each other.

This album is full of arrogant pretense, false emotions, and with an ambition that is both misplaced and unmet.  The foundation is often good though, some of the pieces and interactions between Lateef and Rudolph sound fantastic, if only the reeds and string ensemble were absent.

In sum, both albums are at each other's extreme. The one deep and authentic, the other shallow and arrogant.