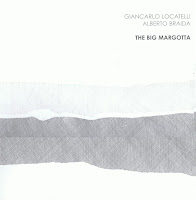 Pianist Alberto Braida and clarinetist Giancarlo Locatelli have played a lot together before, and I think this is their third duo album, just released on vinyl LP. The album consists of two long improvisations of very abstract and intense interaction.

Their music is made "in-the-moment", yet with a lyricism that is omnipresent. There is no noise, no use of extended techniques, just notes entering into often sensitive and hesitant dialogues, flowing into the next approach, releasing tension, adding some soft timbral shifts over equally shifting harmonics, once with short rhythmic undertones, often without, moving together, slowly forward, intensely forward, without sense of urgency yet eager for the next note, curious how the other player will move along, with once in a while vague phrases from jazz history piercing through yet more often than not the notes are new, fresh, full of surprise of being born, here on the spot, and not alone, but together, here, with this other instrument that joins them on the journey, slowly, hesitantly, but full of character and ideas.

This music will require repeated listens to reveal its true power, yet because of its universal nature, it's relatively accessible from the start, despite its level of abstraction.

This doesn't seem essential,so another elitist,'vinyl-only' LP, I won't bother with

This record is fantastic. The recording and music draws you into a black hole and you don't want to leave. Repeated listening for this one.