Trumpeter and saxophonist Daniel Carter is in my opinion strongly underevaluated. He does not have a very pronounced characteristic that makes him instantly recognizable, yet he is one of the few people who can really build a song while improvising, with mood, melody and lots of soul, regardless of the context or the line-up. Carter is not a power-player, quite to the contrary, he is more into sensitive soul or expressive lyricism, while being adventurous at the same time. He is probably best known for his performances with Other Dimensions In Music, one of my favorite bands, or Test, or several of his recordings with drummer Federico Ughi, or his duo album "Nivesana" with percussionist Ravi Padmanabha. I was not too convinced about his collaboration last year with Talibam!, but at least Carter is open to look for new things. I saw him play recently with Jeff Platz, again a real treat, in a different context again, yet equally powerful. Here are two new albums with him, both worth checking out. 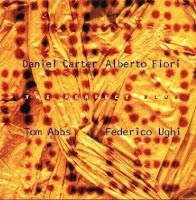 The Perfect Blue is an absolute delight. The music is a kind of ode to the "blue feeling" in jazz, and it basically incorporates the ingredients of jazz history, with "cool" period evocations, boppish pieces, post-boppish improvisations, to free stuff and avant-garde, but throughout the music the undefinable emotional nature of jazz shines through, the kind of sad life energy that is hard to explain.

The band is Daniel Carter on alto, tenor and trumpet, Alberto Fiori on piano,Tom Abbs on bass, and Federico Ughi on drums.

From the very first notes, the cool "If You Come This Way" to the nervous excitement and fierce shouting and blowing on the long "To Pass On", your journey will also lead you to the sensitive, slowly hypnotic post-boppish "Till Late In The Night", which could have come from Jarrett's American quartet of the early eighties. On "We Was There", the "blueness" of restraint expressivity, wonderfully accentuated by Abbs' arco demonstrates again that real soul does not necessarily arise from forceful playing, but the following track "Fight In Sight", starting with nervous rhythms by Ughi sets the perfect backdrop for some fierce opening wails from Carter. Fiori is a pianist in the real bop tradition, comfortable in the various shades and nuances of the style, and he is the perfect companion for Carter's versatile skills to lay his soul bare.

The album will not shift musical boundaries, but it is so beautiful and fun!. Highly recommended. 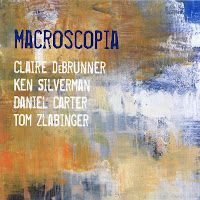 We find Daniel Carter back in a totally different environment with Claire DeBrunner on bassoon, Ken Silverman on guitar, and Tom Zlabinger on bass. Carter uses some small percussion to emphasise rhythms once in a while. The sound of the bassoon is possibly the most determing for the overall sound, yet it must be said that Silverman's unconventional guitar-playing and Zlabinger's often hypnotic bass playing are really good.

All the pieces have a great sense of pulse and forward movement, with sounds interweaving freely, leading to sometimes beautiful and fragile soundscapes, sometimes haunting like "Dumbo Twilight", sometimes more explicitly rhythmic like "Riff Tide", sometimes more abstract such as "Life Rattle".

The music is hard to qualify. It is jazz in a way, but it's equally open to new music and modern classical. I did not know DeBrunner, but the way she uses her bassoon in a context like this is of course highly unusual, yet at the same time a kind of revelation. True, I recently also reviewed albums with Sara Schoenbeck and Katherine Young on bassoon, yet there is a difference in approach.

Totally different than "The Perfect Blue", the album is equally rewarding, for its openness, subtlety and adventurous lyricism. Again a great demonstration of Carter's versatility. His home is where true emotions can be expressed, regardless of style or genre.

If there's a downside to the album, then it's the fade-outs, which - as regular readers know - I really hate : why stop great music in mid-action? Would anyone watching a soccer game or a basket-ball match be pleased when the last ten minutes were never shown? Same with music, I think.

Jeff Platz made another fun Daniel Carter disc that is from Skycap. That group performed in the art space in my building last year and I have his duets with Matt Lavelle.

He is a person of quality.