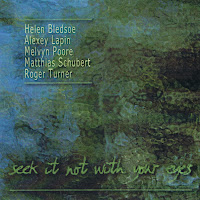 Music should speak for itself. That is in short the philosophy of Russian pianist Alexey Lapin.

This performance at The Loft in Cologne, Germany, is the first time in his life he performed outside of Russia. Originally, Lapin was going to perform with Melvyn Poore on tuba and euphonium, and Matthias Schubert on tenor sax. Yet drummer Roger Turner happened to be around so he joined the improvisation. Flautist Helen Bledsoe joined for the second set, and hence only appears on the last two tracks.

And the music does speak for itself, very much like so many of the releases on Red Toucan, the music has an incredibly organic quality, with notes and textures growing out of what just precedes, without intention of going anywhere, without predetermined plan, yet expanding with the life juices it sucks up around itself, feeding on previous notes, living off the energy of the other, sometimes giving space to other outgrowths, sometimes pushing them away, moving with the environment while being part of it, floating on the breeze or creating their own storms.

The great quality of this band is their incredible openness and discipline in creating these compelling soundscapes that follow their own logic, sounding flawlessly harmonious even without identifiable patterns. On the longest piece, "Little Ways To Perceive The Invisible", the little notes played by the various band members weave a tapestry around a backdrop of silence - and there are moments when you barely hear anything - sometimes sounding like animals in a jungle, at other times like faraway thunder, yet it all flows and moves forward, relentlessly, often hypnotically.

Other pieces have more moments when the volume rises, and sometimes jazz is to be heard, but musical categories sound outdated in this context. Listen how, on the last track, the piano and tuba suddenly fall into the same haunting forward-moving eery unison phrase as if they are trees suddenly pushed sideways in the upcoming wind, without possibility to escape, with Bledsoe playing a weird solo over it, like an intimidated bird in a wild flight. It is music, full stop.

All five tracks have this sense of immediacy and deep presence which are hard to describe. The overall effect is really powerful without being intrusive or noisy. The only thing you can do is try to be part of it. Close your eyes and join them on their exceptional musical journey.

It doesn't exist if you don't listen.