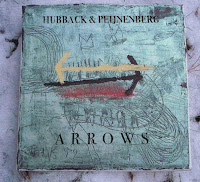 What a great album! Master percussionist and "sound sculpture artist" Steve Hubback meets Dutch minimalist saxophonist Ad Peijnenburg, for eleven varied pieces of highly creative, invigorating and spiritual music. Hubback is not a rhythmic percussionist per se, but is more interested in the sounds coming forth of his many bells, drums and gongs, while in contrast, Peijnenburg is a very rhythmic player, often resorting to repetitive phrases built around a tonal center.

The title of the first two tracks "Impression From Silence" already give a glimpse of the program: the sensitive and careful creation of sounds around silence. There is no sense of urgency, there is no clear melodic or harmonic structure, but the listening experience is magnificent. Listen to the wail of the sopraninosax on "Prooi", which I already thought sounded like a wounded animal, even before I read the Dutch title, which means "prey", just to let you know how evocative these artists are.

"Something Circles" is almost funky, with Peijnenburg indeed playing a pretty basic circling phrase on his baritone sax. It sounds simple and straightforward, yet juxtaposed to Hubback's floating cymbal work, it results in great effect. "Mole Dance" falls in the same category, yet the short piece is permeated by a bluesy feeling, without being too explicit.

In sum, apart from the brilliant first two pieces, you get nine shorter pieces, full of musical joy, with tribal rhythms, interesting concepts which are never overly extended but kept to their bare essence: a cadence, a feeling, a mood, a timbral exploration : light-footed and fun. An ode to life. In terms of recent reference : it fits well in the same series of other great sax percussion duos : Han & Frode by Bennink & Gjerstad, Nada by François Carrier & Michel Lambert,  Circle & Line by Donat Fisch and Christian Wolfarth