Chamber jazz is a jazz subgenre that often mixes romanticism with classical influences, played by small ensembles without percussion but with strings. Well, if that's the definition, then here are two great albums that fully meet the description. 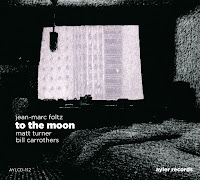 In the liner notes you can read that the sole plan for the session was : "Let's find some music, somewhere... over the rainbow", and the three musicians got to work, resulting somewhere "on the moon". The trio is Jean-Marc Foltz on clarinets, Matt Turner on cello, and Bill Carrothers on piano.

I have shared my admiration for Foltz's playing in earlier reviews, Matt Turner is known for his work with Scott Fields, Jeff Song and Bill Carrothers, yet his best album is still with Ken Schaphorst's trio "Indigenous Technologies", Carrothers himself has made some name in the past years with his own musical approach, one which is usually too mainstream to find a place on this blog but certainly one with great merits. Of the three, Turner and Carrothers are the ones that are used to color within the lines, Foltz daring to go outside of the lines, and their combination is a strong one.

The music on the album can be described as abstract lyricism, or modern romanticism. On some pieces patterns emerge, but not necessarily, and if they do, the trio manages wonderfully to steer away from cheap sentimentalism, yet they add the raw, unexpected and expressive elements that make this music so fascinating and refreshing.

I will not review each piece, but give some examples. On "Black Butterfly", Foltz's bass clarinet soars over a dark, odd-metered left hand by Carrothers, and when Turner's elegant stretched and mournful arco tones join, you get a musical universe full of conflict and joy, all created within barely three minutes.

"Knitting Needles" starts with eery flageolet tones on the cello, with the clarinet repeating a single dark phrase, and Carrothers playing great percussion inside his piano. Again the world is full of gloom and darkness, Turner starts playing full-toned circling around the same tonal range, as does Foltz, and with Carrother's relentless hammering the end result is staggering and hypnotic.

"Moondrunk" is fully within the world of romanticism, with slow atmospheric piano chords, but listen how Foltz's use of timbral changes on his clarinet adds emotional power, twisting his tone into a heartfelt cry of madness, ending in a barely audible moan. He takes this concept even a step further on "Crosses", which could have fit well within the David Darling catalogue on ECM if it were not for Foltz's gut-wrenching sounds on clarinet.

I am more than a little excited about this album. It is not free jazz, far from it, yet for an entirely improvised piece of music, it has the kind of restraint and discipline that is rare. What the trio does is so strong and lyrical that it is highly recommended, regardless of genre classification. Their technical mastery and subtle creativity lifts this music far above the average. Even if some pieces are abstract, and there is some left-of-center playing, this is an album that should please wide audiences. Let's hope it does. 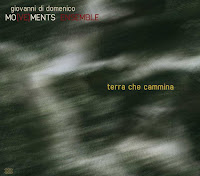 We know Belgian-based pianist Giovanni Di Domenico from his album with Tetterapadequ, and his recent collaboration with Alexandra Grimal, Seminare Vento. On this album, he is joined by John Ruocco on clarinet, Ananta Roosend on violin, Anja Naucler on cello, Claus Kaarsgaard on bass.

The music is slow, intimate, precise, and quite expressive. The album starts with solo piano, an eery melody, with sparse notes of the right hand repeating a bluesy phrase. Yet it starts for real with the second piece, with the strings offering a harmonic backdrop for lyrical free soloing by Ruocco. "MM" is possibly one of the strongest compositions, because of the stark contrast between the almost single chord hammering of the piano against the slow intense theme played by the strings, that start going their own way as a result of the piano going berserk, yet when the strings find back the theme, the piano is subdued, and tamed into sparse intimate notes.

Some pieces are short, and create a world in less than a minute, such as "Hombre", others are quite expansive, like the long "Brainbow", on which Kaarsgaard gets a three minute bass intro, full of restraint and wonderful pace-setting, before Di Domenico adds his minimalist piano touches to deepen the created atmosphere.

Di Domenico brings a total concept, with ambition and the result is excellent. Influences can be easily found in jazz as in African or Middle-Eastern music as in classical music, often combined, yet all very subtle and very much in its own stylistic universe of intimacy and closeness. And to their credit, the band does not shy away from some jokes or playful antagonism, as on "Sirr". Jazz with strings is often overly sentimental or arrogant kitsch, yet this album develops its own kind of creative vision on the possibilities of the string ensemble in jazz. Recommended!