Unity of action, time and place ... or unity of style?

Despite my wild enthusiasm for anything that is genre-breaking and liberation from constraints, there are still things which bother me, because of their lack of constraints. The Greek philosopher Aristotle already discussed the three cardinal rules for theater : the unity of place, time and action. This is of course a load of bollocks and these kind of rules only exist to be broken.

The unity he missed though, is the unity of style. If you establish a vision on what something should sound like, or look like, or feel like, you should stick to it. The best albums in music history have that unity of approach : Miles Davis' "Kind Of Blue" or "Bitch's Brew", Pink Floyd's "Dark Side Of The Moon", Lou Reed's "Berlin" or Metallica's "Black Album", to give just a few examples from different horizons.

This is the thing that has been bothering me about the two following albums. Both contain great music. However, both contain great music in different stylistic universes. And even though the different parts are excellent, when listening to the album as a whole, in one piece, it is odd somehow. If they had organised these tracks differently, and put them in two separate albums, instead of now on a double CD, the end result might have been stunning. Now I am left with more than just a little frustration about what might have been. 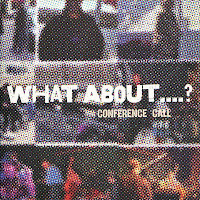 Conference no longer needs introduction. It's the stellar free jazz band consisting of Gebhard Ullmann on tenor saxophone, soprano saxophone, and bass clarinet, Michael Jefry Stevens on piano, Joe Fonda on bass, and George Schuller on drums. A kind of supergroup if you want.

The first piece, called "After Like, Part 1" is fully improvised and creates an otherwordly eery environment, without real established rhythm, or patterns whatsoever. It is organic and flows like the wind, grows like nature, with the power and drive increasing as it moves forward. It is fantastic. The next piece is in the same vein, certainly at the beginning closer to free improv than to jazz.

Then you have a style-shift for the next three pieces, which are composed, and built around traditional concepts, although they do evolve into exploratory timbral excursions, yet the harmonics, the theme remain the central focal point, whether ballad-like, as on "What About The Future?", or boppish as on "Circle".

CD2 starts with "After Like, Part 3", the qualitative equivalent of the first tracks of the first CD, fully in the same vein, and equally stellar: Ullmann's playing is fabulous, but the eery accents by Stephens, Fonda's arco and Schuller's extended use of percussive possibilities are of the same high level.

But then to my dismay, the next piece is a polka! True, it gets the necessary deconstruction, but to hear this somewhat humorous track after you've been entranced by a fabulous musical universe, is a real shame. "Litmus" is boppish again, and the last two pieces could again be part of the more serious atmosphere of the first track. Ullmann is better than I have heard him before.

So you get the bizarre mixture of real artistic creation with some silly or plain entertaining music, true, all brought with great skills and drive, but somehow not fitting together.

A selection of the best pieces on the album would have resulted in a real musical treat. Two great albums in two different styles somehow got mixed here. 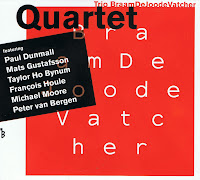 The Dutch trio BraamDeJoodeVatcher is Michiel Braam on piano, Wilbert de Joode on double bass, and Michael Vatcher on drums. For their twentieth anniversary of the band, they invited a wordclass list of modern jazz musicians to complement their trio with a horn part : Michael Moore, Paul Dunmall, Mats Gustafsson, Taylor Ho Bynum, François Houle and Peter van Bergen. A quite impressive list of musicians.

The four pieces with Michael Moore, spread over the two CDs, are great modern jazz compositions with improvisations with some world music influence. They sound fresh, inventive and joyful.

The piece with Mats Gustafsson of course belongs in a different league and style. His raw tone and unpredictable phrases, filled with the gravitas of life is truly at the other end of the spectrum of Michael Moore's feeling of optimism. Houle adds some abstract lyricism to the proceedings and calms down the piece toward the end.

The two pieces with Taylor Ho Bynum are also in a different style. The first is a great open-ended composition, allowing Bynum for interesting explorations over De Joode's wonderful bass. The second piece starts great, full of eery whispering sounds, yet then it really collapses into a kind of twelve bar blues that may entertain your run-of-the-mill audience, but is in stark contrast to the beginning.

Peter Van Bergen brings us fully in the avant-garde context, with soft yet eery blowing, yet the second piece brings us back into the same twelve bar blues as on the first CD. Again, the contrast is too abrupt, from the subtle and sophisticated to the hard predictable beat of the blues.

Paul Dunmall uses his bagpipes for a relatively mild melodic theme, but as you might expect ... he shifts to wild unmelodic blowing, only then with sensitive abstractions.

Again, all the pieces have their own merit, and all fall easily within the category of excellent improvisations, yet it all lacks unity. It does demonstrate the great versatility of the Dutch trio and the breadth of their musical interests and capabilities. It is a great celebration to their twenty years of playing together, so they are allowed to include all this variation. In all, this is a fresh album with many faces.