What happens when they stop beating the drums?

For the answer to the question above, see my original post on solo bass albums. Apart from that, I can say that I like solo bass albums. First, I like the deep sound of the bass, its power and beauty, and when played solo, the full sensuality of the strings on wood become all the more clear, often hidden in the overall sounds of bands, even small ones, or impossible to hear when driving a car, unless you really turn up the volume.

So it's always a pleasure to introduce new solo bass albums, this time by two prominent bassists in the current modern jazz scene: Jason Roebke and Robert Landfermann. 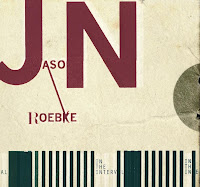 This EP is Jason Roebke's second solo bass album, one in which he delves even deeper into the nature of sound and silence than in his previous one. The album starts with a plucked note, followed by a barely audible successor after 33 seconds, then a second hard note after 50 seconds. then 1 min. 13 seconds, then 1 min. 44 seconds, gradually decreasing the intervals between notes, while at the same time changing his touch, and adding - again barely audible - other less identifiable sounds, changing between resonating sounds and suddenly muted ones, playing single string or chords, gradually increasing the intervals.

It is very minimalist, but only temporarily, because by the tenth minute, the bass is playing for real, still slowly, but sensitively, cautiously, precisely, but if you thought it would continue picking up speed, you're wrong, it becomes unpredictable, with long silences being alternated with some extended techniques, some boppish playing, some silence.

The result of this is quite unexpectedly that you cannot listen differently than in a very concentrated way. Everything you anticipate will happen, does not happen, so rather than listening in on automatic pilot, you're forced to be there with your full attention on the bass, its sound and the silence surrounding it. And I must say, that is an exceptional feat for a solo bass album. Another example that less is more and that lack of repetition is guaranteed to keep you alert. 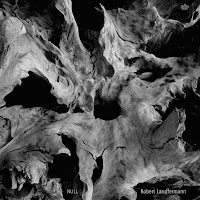 German bassist Landfermann's approach is different. From the very first track he goes beyond any sound you think could ever come out of a bass, piercing, industrial, resonating, screeching, howling animal-like. Quite impressive stuff.

I knew him only from his collaboration with Christian Lillinger's Grund. But despite his young age, he has already played on several dozen albums, and this is his second solo bass album.

The mad timbral approach of the first track is not continued in the second piece, which is a high tempo complex piece which make you wonder whether you actually hear only one bass. Most pieces are relatively short, somewhere between three to four minutes, just setting down some ideas and exploring sounds, some of which are absolutely staggering, like the piercing whale songs of "Ich Habe Nie Gelernt Zu Frieren" (I have never learned to freeze), or the tribal drumming on the next piece.

Alternating virtuoso playing in a regular fashion with interesting explorations, this is a clear bass-player's album in the first place. In contrast to the piercing sounds of the first track, he ends the album in the most convential of ways, but no less brilliant, with some great classical-sounding arco playing.


Both albums complement each other somewhat. Roebke tries to make a musical statement, a solo bass album that can be enjoyed by non bass players. Landfermann is less interested in musical expansion or the building of tension than in the sounds he can create with his instrument, leading to much more variation by definition.

If you like the sound of the double bass, like I do, I can recommend both albums.