John Coltrane was not only a phenomenal saxophonist, he first and foremost changed the course of jazz in a couple of years time, lifting it out of the confines of urban entertainment into the world of art and spiritual power. He incorporated some of Albert Ayler's and some of Ornette Coleman's ideas, but he integrated those into something grand and epic, into a musical sphere and language that did not exist before him. He turned even a chidren's song like "My Favorite Things" into a mesmerising dimension of floating and endless energy and expressivity.

He turned jazz into a whole new thing. The music of Jarrett's American and European quartet's would not have existed without Coltrane, nor would for instance Abdullah Ibrahim's "The Journey", to give just a few examples.

Here are two albums which capture this great new dimension in music. 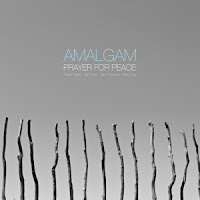 The first one is Amalgam's "Prayer For Peace", recorded in 1969, and it might well be the re-issue of the year. The band is Trevor Watts on alto, Jeff Clyne on bass and John Stevens on drums, with Barry Guy playing bass on the title track.

"Tales Of Sadness" starts with arco bass and a wonderful melody on the alto, slowly, very slowly increasing the intensity till they're playing up a storm after a while,with especially Watts doing an extraordinary expressive piece while staying within the tune, overblowing like crazy, till absolute madness, relentlessly, without losing sight of the melody which suddenly comes shining back through the mayhem like a sudden smile breaking through the tears on a face full of agony and fear. This track is nothing short of phenomenal, and by itself worth buying the album for.

The second piece, "Judy's Smile 1", is less intense, yet equally beautiful, and it is continued on the second side of the vinyl LP with "Judy's Smile 2", which starts slowly with great bass-playing by Clyne, and perfect accents by Stevens for a quiet almost gospel-like melody on the alto. Then Stevens starts pushing up the tempo, and the piece gains again a strong momentum, going beyond bop in a more free fashion.

Also the last piece, with Barry Guy on arco, lifts the music into high spheres, fully delivering the title's content, without any need for further explanation, reverent, expansive, spiritual and full of inherent beauty and emotional depth. Magnificent! 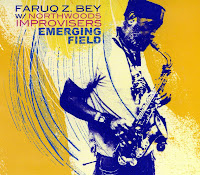 Saxophonist Faruq Z. Bey is possibly less known than Trevor Watts, but he's a free jazz player who incorporates some Ayler with Coltrane and African music.

On this album, he is joined by the Northwood Improvisers, which is Mike Carey on bass clarinet, alto saxophone, tenor saxophone, and shaker,  Skeeter C. R. Shelton on alto and tenor saxophone, Mike Gilmore on marimba, Nick Ashton on drums, and Mike Johnston on percussion.

The music has this grand and expansive approach that Coltrane introduced. Through a strong rhythmic backbone, very African in nature, and long-winding thematic improvisations, the music soars, and yes, it is less complex than Coltrane, or less expressive than Amalgam, but it is so compelling and hypnotic, that it is a real delight. The interesting thing is that this music sounds like it was made in 70s, reminiscent of some Art Ensemble work, or Human Arts Ensemble, or Sonny Simmons, but less wild, more controlled and accessible, but indeed grand and epic. A really strong and recommended album.


Both of these bands are indebted to Coltrane. Even if their approach is totally different, you can hear the great master's legacy and inventive power still playing in these bands.

I am open to lots of musical genres, from classical over rock and prog-rock and avant-garde and trip-hop to ... well, no, not as far as rap, but in all frankness, none of these genres has the breadth, depth, expressive power and sheer musical delight as jazz.

To a large extent thanks to Coltrane.