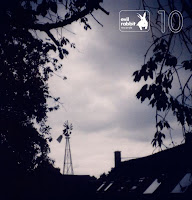 For fans of free improvisation, here is another great sax-bass duo album, with Dutchman Ab Baars on reeds and German Meinrad Kneer on bass. The album brings you eleven tracks of relatively accessible jazz with each piece having its own musical dynamics, sound and development, created out of nothing more than excellent listening skills and anticipation, the result of having played together a lot.

Yet the most astonishing aspect is the emotional depth that is the exclusive of improvised music, but certainly never guaranteed. Listen to "The Pledge", which gradually evolves from slow and somewhat joyful playing of sax and arco bass into a straining, haunting repetition around a single tonal center.

Baars's influences stretch from Monk over the Art Ensemble Of Chicago to Butch Morris, with whom he played, with the additional eastern element and shakuhachi playing, as on "Bird Talk" or "Eastern Rudiment". Although born and educated in Germany, Kneer is very active in The Netherlands, and his playing is indebted to greats such as Peter Kowald (the physicality) and Barry Guy (the creative irreverence).

Together, they meander between form and abstraction, full of assent and dissent, dissonance and echoing, yet the true power lies in the almost endless variation of timbre in which the dialogue takes place, adding an almost voice-like inflection and subtlety. Despite their freedom of approach, they deal with it in a very mature way : they are beyond the deconstruction phase : there is no shouting, there is no shock element : the music almost arises organically out of spontaneous sounds, and built upon through creative interaction.

In sum, two artists who understand music, have journeyed deep and far to know what works and what doesn't, and use all the constraints and possibilities of the duo format to bring a very varied, coherent, adventurous and intense album.

A joy for the open ear.