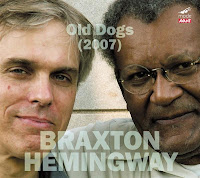 This 4-CD set is the equivalent of Braxton's superb duo recording with Joe Morris some years ago : "Four Improvisations" of around one hour each Braxton keeps changing his instruments, while the other musician, in this case drummer Gerry Hemingway sticks to his instrument, with some changes to vibe and marimba.

This is in-the-moment music, without plan or project, yet full of process : timbral explorations, fast interplay, joint creation and changing of volume and mood, changing intensities as we move along, sometimes raw, never rude, often cautious or even hesitant, but then more to create a sense of vulnerability than for lack of ideas, yet mostly gentle and subtle.

The fact that we get four CDs of one hour each is basically irrelevant, apart from its practical advantages. Musically, it could have been one long four hour piece, or the opposite, dozens of different pieces of shorter duration.

As said before, this is by far the Braxton I prefer : full of freedom, unhindered by his own compositional tricks, adventurous and sensitive, musically interesting and captivating. But it is a duo recording of course, and this is as much Hemingway's album as it is Braxton's, even though the drummer's personal discography tends to more oriented towards composed music, with the exception of his duets with John Butcher: here again he is stellar : versatile, rich, rarely repeating himself, endlessly inventive.

In any case, I haven't listened enough to the album to give it a thorough analysis, but it demonstrates again that there is no music like free music, if played by artists with skills, ideas and emotions. The lack of constraints brings the best out of these two musicians. Highly recommended.