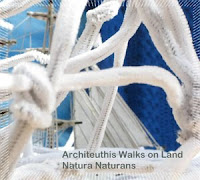 For the non-marine-biologists among us: "architeuthis" is nothing less than the giant squid, and making such a creature walk on land as this duo's name suggests, is hard to link to classical music.

Ergo: you know you're in for a special trip, on land or elsewhere ...

Katherine Young plays bassoon and Amy Cimini plays viola. They improvise in the most fascinating way, tearing and ripping sounds out of their instruments that nobody in history ever suspected could exist in there.Yet even if both artists use the entire range of sounds and beyond, they still do something meaningful with it, creating improvised pieces that are extremely hard to describe : sometimes gentle and intimate, as in "The Field", or hypnotic heartrending drones as in "Below The Thermocline", or open-spaced crackling sounds, as in "Inside/Outside". But whatever they do, the approach is clever and emotional. Young's bassoon weeps and cries unconsolably on "The Surgeon of Fades", with Cimini's multistringed flageolets adding even deeper distress and brokenhearted sorrow. It is full of anger, madness, adventure and expressive power from beginning to end.

Ergo: this is not unobtrusive music. This is not classical chamber music. This is raw and refined. This is expressive sophistication. They've found a voice and musical direction that is all their own. I hope they keep searching in this direction.

This is there sophomore album, and I haven't heard their debut album, but if it's only half as good, it's also worth checking out.

I can't wait to hear them perform.