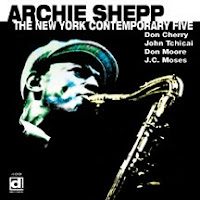 A great glimpse into the first steps of free jazz, this re-issue of The New York Contemporary Five's performance in Copenhage, Denmark in 1963. The band consists of Archie Shepp on tenor, John Tchicai on alto, Don Cherry on cornet, Don Moore on bass and J.C. Moses on drums.

Truth be told, this is only half the original performance, that was released on two LPs originally, with eleven tracks in total. The European CD version contained ten tracks. Now this first CD release in the US has only six of the tracks. But that should not spoil the fun, quite to the contrary: what a fantastic gift by Delmark to make this music available again.

Young listeners will surely wonder why this kind of music, which is still so close to bop, caused such a stir at that time: there are themes, there is rhythm, there is also a clear structure in the pieces. Young listeners will also wonder about the quality of the playing, the simplicity of the approach, the lack of subtlety, the obvious relying on phrases that were learned for other occasions, and the number of times they clearly got it wrong too.

Yet all of us will enjoy the raw fun, the wild excursions, the improvisations that fly free as the wind, adding stuff as they see fit, transgressing the harmonies, the playing without any other concern than to express themselves, with an overall still civilized anything-goes-attitude.

The album starts with a typical Cherry piece, "Cisum", with elements of army playing and a stop-and-go composition, is followed by the bluesy "Crepuscule With Nellie" by Monk. Then follow the two highlights of the performance : Ornette Coleman's "O.C." and his great "When Will The Blues Leave". Shepp's "The Funeral" and Tchicai's "Milk" finish the album.

Don Cherry and Archie Shepp are the more interesting soloists on the album, yet it's the overall performance, the emotional authenticity, the breakthrough approach, and the overall joy - despite some sad pieces - that make this one worth checking out.