"It could be argued that the trumpet is leading the way again ..."

I will share the full sentence of Joe Morris's liner notes to "Tooth & Nail" : "We are now in the second century of improvised music. The entire history of expansion of technique and aesthetics used by trumpeters and guitarists in that nearly one hundred year period is available for us to hear.(...) For the narrow-minded, it's all been done, or it must be done in a certain way to have meaning. For the rest of us the current situation is a fresh start on the original situation, and there is no end in sight". (...) Our community of players is still relatively small, but is now global as well as local. Interestingly, it could be argued that the trumpet is leading the way again, as there is a number of extremely inventive trumpet players in this period who are setting new conditions with new methods".

Guys, you get the gist : open your ears and minds, and get ready for some music, from across three continents that goes beyond the known, in outer space, propulsed by the power of history. 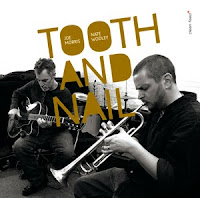 I have had the chance to listen to this album many months before it was released (thanks Nate!), and even if I found it hard and harsh and raw during the first listens, with Morris's nervous little guitar sounds cascading over each other, bouncing back and forth, with trumpeter Nate Wooley's tones ranging from the voiced to almost soundless whispers.

Because Morris plays acoustic guitar, and because Wooley's trumpet sound is the opposite from muscular, with notes falling out of his trumpet rather than soaring through the ceiling, the music is incredibly intimate and close, warm even, despite the atonal nature of the proceedings. It is an alien universe, but like most avant-garde work, you as the listener need to make an effort too.

And once you've listened to it a lot, you start discerning structure, or repeated patterns, or little echoes that are not so obvious at first hearing.  And once you're in their universe, it all is very welcoming, charming even, precious, sensitive and fragile.

Listen to Morris's intro to the second piece "Gigantica", on which - in contrast to the title - sounds escape from the guitar that you would not expect, almost harplike, yet each note played in singular isolation, with lots of space around them. Wooley accentuates by blowing some little puffs of air over it.  But on other tracks the guitar evolves with arpeggiated chords, equally minimalist yet with a touch more density, with the trumpet adding voiced interaction, in a language that is incomprehensible though touching.

It is a strange universe, but it is coherent, appealing and sometimes even hypnotic. 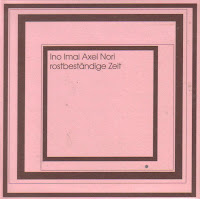 German trumpeter Axel Dörner is best known for his work with Alexander von Schlippenbach or with Die Enttaüschung. On this double CD he plays with Kazuo Imai on guitar, Nobuyoshi Ino on bass. Noritaka Tanaka joins on drums on the second disc.

The band's universe is equally strange and minimalistic as the Morris/Wooley album, yet possibly a touch - but nothing more than that - more accessible, and then only at moments. The first disc consists of free improvisation between guitar, trumpet and bass. The second is built around compositions by Dörner, and with Tanaka on drums you could even qualify the music as jazz, which cannot be said from the first disc.

Again, you wonder about the nature of music, about aesthetics, about aural discomfort and purity of sound, about refinement, delicacy and finesse.

And like the Morris/Wooley album, you need to get into this, and harshness will turn into sophistication and sensitivity.

After you've listened to this music, everything else you hear will sound blunt, heavy and superficial. Lady Gaga for sure, but it was the same with the Mozart I listened to right after this CD.

And that is bizarre ... but says enough. 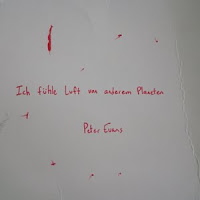 In earlier reviews I praised Peter Evans to the stars,especially his stellar "Nature/Culture" solo CD.On this album, his trumpet playing is electronically altered into some kind of bizarre experiment that has some industrial connotations, even valve clicks become percussive sounds with echo and reverb effects. If you listened to it without knowing anything of the context, I do not think one listener out of a hundred would identify the instrument as a trumpet. But that's of course a pointless comment from a musical perspective.

Again, a trumpeter leading us into uncharted territories. And like Joe Morris's liner notes, there is reference to the early 20th Century, but now not to jazz tradition, but to the first atonal composition ever, by Austrian composer Arnold Schoenberg's, dating from 1908, on which a soprano sings a poem by German poet Stefan George : "Entrückung", with the sentence : "Ich fühle Luft von anderem Planeten" (I feel air from other planets).

But there is no intimacy here, you are indeed in a more greater expansive space, travelling through space, crossing the final frontier.

Thank you trumpet players for these new vistas, and obviously the musicians going with them on the same journey.

I can only add some more verses from the same poem :

"I lose myself in tones, circling, weaving,
With unfathomable thanks and unnamed love
I happily surrender to the great breath."

Here is the Stefan George poem in full.

I feel wind from other planets.
I faintly through the darkness see faces
Friendly even now, turning toward me.
And trees and paths that I loved fade
So I can scarcely know them and you bright
Beloved shadow—summon my anguish--
Are only extinguish completely in a deep glowing
In the frenzy of the fight
With a pious show of reason.
I lose myself in tones, circling, weaving,
With unfathomable thanks and unnamed love
I happily surrender to the great breath.
A violent wind passes over me
In the sway of commitment where ardent cries
In dust flung by women on the ground:
Then I see a filmy mist rising
In a sun-filled, open expanse
That includes only the farthest mountain hatches.
The land looks white and smooth like whey,
I climb over enormous canyons.
I feel as if above the last cloud
Swimming in a sea of crystal radiance--
I am only a spark of the holy fire
I am only a whisper of the holy voice.