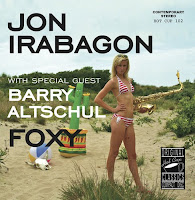 The tacky art work on the cover may deter some of you, thinking that this the umpteenth easy listening jazz CD that has nothing but low quality to offer. A closer look and you will see the references to the first sax trio ever, with Sonny Rollins on the cover dressed as a cowboy in a desert landscape, here somewhat improved by a blonde babe in the dunes.

The content is some of the most fabulous high energy free boppish sax trios that you will hear in a long time. Jon Irabagon blows his lungs out, together with the rest of his organs and his brains for a eighty-minute long unrelenting piece supported with an equally muscular effort by Peter Brendler on bass and Barry Altschul on drums.

When is say "relentless", I mean "relentless": blowing like this for a few minutes will exhaust the most experienced among saxophonists, but the physical power that Irabagon demonstrates here is worthy of a gold medal in various olympic disciplines combined. In that sense it is a great sequel to his previous "I Don't Hear Nothing But The Blues" with Mike Pride on drums, only even more energetic.

The music itself is not adventurous, nor is it new, quite to the contrary, the trio brings phrases and rhythms from the great bop tradition, including blues, but then full of power, adding all the techniques developed in the past decades, driving the music often into wilder ranges, with shifting rhythms and tempi, although the latter is mostly of the high speed genre, with one exception, the "Foxy (Radio Edit)" on which the speed slows down a bit, and this by itself is great fun, as if the speed would be too high for the radio audiences, then it picks up again to end full blast with the ten-minute last track, "Moxie".

Despite being one lengthy track, it is somewhat arbitrary cut into twelve titles, with obvious recognisable phrases coming back in several pieces. That the music is all about raw energy and forward drive is best illustrated by "Roxy", on which Irabagon keeps blowing the same three notes on and on and on and on for minutes on end, like a railroad worker swinging down his hammer. It's all about the drive.

It is not high art, but it is high entertainment. Not ground-breaking, but at moments hard to believe how so much energy can be kept up for such a long time. Really hard to believe. Great fun!