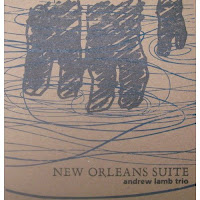 In the wake of hurricane Katrina's catastrophe in New Orleans, several musicians captured tried to express what they felt about the situation in what they do best : their music. Possibly trumpetist Terence Blanchard's "A Tale Of God's Will" is best known, like its title a tasteless amalgam of strings, cheap drama en ditto sentimentality, but with excellent trumpet playing.

This album is almost entirely the opposite : a cheap production, with a musical and emotional authenticity that is as rich as it gets. The anger, the political criticism, the sadness, the powerlessness : it is all here, in the text of "Dyes and Lyes", the first track, but also in the music of this great trio : Andrew Lamb (aka the Black Lamb) on sax, Tom Abbs on bass and Warren Smith on drums, now re-issued on Engine records. All three musicians have played extensively before, and released in duo or quartet line-ups.

Their approach is direct and straight from the heart.  The cynicism and ironic joyful tune and text of the first track, with some great lines such as these ....

"Mother Nature just staged a terrorist act on ou' ass
And for once in a loooooong time, not a muslim was blamed"

"We're gonna rebuild it
Better than before
Of course we'll have to
Eliminate the poor.
That includes the culture
That the place was famous for"

... soon evaporates for the more serious stuff. The lengthy "Katrina's Path" is an almost intimate piece of subdued desolation and despair. "Rescue Me", with its pumping bass and high tempo percussion results in the cry for help the title refers to. "Black Water"starts with one of Warren Smith's major strengths : to tell stories through percussion. Listen to the initial chirping of the crickets over chimes and bells, contrasted by deep rumbling sounds of scraping his drum heads. The piece evolves with no real sense of direction, but the playing is excellent: unassuming but genuine, and gets even more sensitive and nuanced on the next, more joyous piece. The album ends on a positive note, with a joyful tune played on the harmonica, accompanied by whistle, bass and drums. Because of the lack of a strong lead instrument, it strangely lacks substance, ending quite indecisively and helpless with no climax or finale at all.

The album was possibly the first to commemorate the devastating events of 2005, and in my opinion a strong and real statement.

Hi Stef - Andrew was on The Jazz Session last month talking about this record. The interview is here: