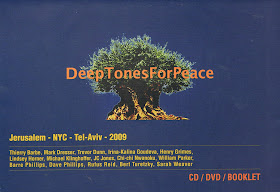 So far two albums were played by double bass quartets, William Parker's "Requiem" for four basses, in memory of Peter Kowald and Wilber Morris, with Henry Grimes, Sirone and Alan Silva, and with Charles Gayle on sax, and "For all it is", with  Barry Guy, Barre Phillips, J.F.Jenny-Clark, Palle Danielson, accompanied by Stu Martin on percussion.

Now JC Jones, a bass-player from Israel, and the boss of the Kadima label, and William Parker stretch it even further, with no less than fifteen bass players, playing together in two different locations over the internet, without being "compromised" by other instruments.

The purpose of the meeting is to create a movement for peace in the Middle-East.  As William Parker writes in the liner notes "Philosophically, it is about making a commitment and truly believing that the music that we are doing can really bring about balance in the world".

The music is more than just dark and deep rumbling as you might expect. The long movements come and go like waves, but there is the occasional arco solo, jazzy or classical, or a common reduction of the volume, or explorations on the basis of a dissonant phrase, some sudden pizzi changing the course of the music again, .... or some sad and melancholy bowing over a backdrop of a mourning bass choir, It is more than just a political statement for peace. It is also worth listening to with shifting colors and shades of sound, pitch and volume.

But it is all more than just a CD + DVD, carefully produced and with a nice full-color booklet, it is also an ongoing project, with bassists playing their pieces for peace at regular intervals. Go to DeepTonesForPeace for more information.

DeepTonesForPeace will be performing on October 8 at the International Double Bass Convention in Berlin, Germany.

An excerpt from the DVD can be viewed here.

William Parker ends his introduction with the following sentence : "May deep tones for peace echo and resound across the universe".

We hope they do.

Hi,how are you today?I have surfed your blog serveral times, your blog is great and having a lot of intresting things. If you have time, you can visit my blog and feel free to give me some comment, more important thing is being my follower! Thank you very much.

just for your information, Joe McPhee has recorded live performances with a double-bass quartet including Michael Bisio, Dominic Duval, Paul Rogers, Claude Tchamitian. And these 2 CDs are great!

Here is my review of McPhee's Angels Devils & Haints : http://freejazz-stef.blogspot.com/2009/08/joe-mcphee-angels-devils-haints-cjr.html


But this is the opposite: a saxophonist accompanied by four basses.

Just a small point. William Parker does NOT play on the CD and Sarah Weaver just conducts. This makes 13 bass players if you check the very confusing liner notes.

Keep up the good works.