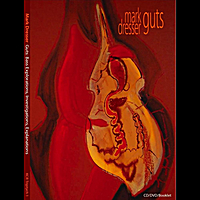 When I introduced myself to Mark Dresser after a concert, he said "So, you're the guy who always writes negative reviews", and that was the end of the conversation. Until earlier today he was of course totally wrong, but now he's suddenly right, but not because of this new CD and DVD he released.

If you ever buy this album, listen to the CD first. And listen in wonder.

Then watch the DVD. On it, there is an interview with his colleague college professor Roger Reynolds, and an interview with Dresser himself about music, interplay, spontaneous creation, context and control, the use of eletronics, and many more topics. Lots of interesting stuff. But the real treat, for bass-players and non-bass players is the following hour of Dresser's explanation and demonstration of the tricks of his trade. This is very rare and incredibly instructive.

You get information on two-handed pizzicato, on falsetto flautando, on bitones and artificial harmonics, lots on partials, on bowing techniques, on multiphonics, just all these great sounds you often hear without actually knowing how they're created. This is stuff that you hear at a Dresser concert, but actually never manage to notice because of the distance or the speed. But he is a great teacher: his explanations are precise - though read - and his demonstrations are easy to follow and understand. To the non-bass player that I am, it was all very enlightening, and I hope it will too for those of you playing the instrument.

Then listen to the CD on which all these techniques are put into practice, not for demonstration purposes but to make music with. True, the CD will keep its didactic nature (it kind of lingers on in the brain), but then the sounds and the music he displays here are absolutely fabulous, from the gut-wrenching Hendrix-like tones on "Innard Pulse", on which sliding near unisons break up into sliding descending gestures returning to bitones, over the weird sonic environment of "Demus", which starts intimately yet gradually destabilises the listener with haunting urgency, to the more common sounds of the bass played pizzi on "Duohandum", but then played with both hands plucking the strings and playing the notes, giving the impression of two basses playing simultaneously, or the magnificent "imagE/contrabass" on which his subtle arco tones will move you to tears.

The CD could stand on its own. The upside of the whole is also its downside. When listening to the CD, you cannot but think back about the wealth of demonstrated techniques, wondering which one is being used, and that's detracting the listener's attention  - or at least mine - from some great solo bass. So you should keep listening to it again and again, till the only thing you hear is the music.

Are you the guy who "always writes negative reviews"? That seems really weird...maybe I just don't read the right (wrong?) ones, but you seem to almost always talk about recordings you appreciate. Weird. Some friends of mine hosted Mark Dresser once, and he acted like a spoiled crank then, too. Perhaps a chemical imbalance. Ah! The price of genius!

Thanks for your blog; I enjoy reading it.