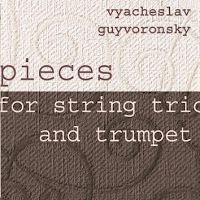 Russian trumpeter Vyacheslav Guyvoronsky usually does several things to me : his technical skills are awe-inspiring, with a background from classical to avant-garde, but with a musical vision that is so full of conflict that it disturbs me. The conflict is the one between serious heart-felt emotions, musical playfulness and even silly jokes.

The same is true on this great album with an equally fabulous string trio, with Vladislav Pesin on violin, Dmitry Yakubovsky on alto violin, and Mikhail Degryarev on cello. But the good thing is that the majority of the ten pieces are serious, with elements of classical romanticism, avant-garde dissonance, folk tunes, middle-eastern scales, ... you name it, it's here. "Pastoral Fugue" is a nice example, starting with solo trumpet, heart-rending, then being joined by a lovely folk tune on the violins, which evolves in Bach-like counterpoints of the three string instruments, with the trumpet acting as the improvising party.

All pieces are through and through composed, at least for the strings, which gives Guyvoronsky the ample opportunity to soar over it and react in any way he feels, including not playing at all on the third piece, "Puzzles".

On "Fugure With A Lost Theme", his trumpet-playing, unvoiced and weeping, acts as a disturbing factor over the classical trio, a great conflict of styles, but the effect is fantastic. "Sol-fa In Tibetan Style" starts with drone-like strings and bluesy sad trumpet, but then the piece starts picking up speed, with a more middle-eastern than Tibetan feel, adding rhythmic complexities and vocals, full of rhythmic emphasis : weird but it works well. "Ballad" is again all melancholy, but then on the right side of sentimentalism. But I assume Guyvoronsky thought that four minutes of seriousness was more than enough, so then comes "Burgher's Concert", a fun piece, and a great showcase for his exceptional technique, with a tune fit for the "Comedy Capers", which even includes his trumpet laughing full-heartedly.

The album ends with the slow and beautiful "Saraband".

In short, it is fantastic. But then I wonder what it would sound like if he had left out the jokes. Would it be better? Would it be more coherent? Would it still be Guyvoronsky? And then I think possibly not. In contrast to some of his previous albums, I think he found the right balance between artistry and entertainment.