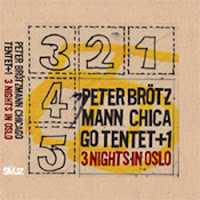 And 28-30 October they are at it again at Victoria, Nasjonal Jazzscene in Oslo! New box next year I guess.

a magnificent release, in my opinion, one that's maybe less 'important' than the classic 3CD set on okka disk, but this one shows a wider range and arguably has a better sound. my favorites are the first cd, which is a terrific display of their strengths, ranging from massive collective passages, to more introspective, nearly soothing parts and expressive outbursts. i also like the vandermark/mcphee interplay a lot.... terrific release

Man, I wish I lived in Oslo.

Unfortunately, the Okka set is "temporarily out of stock". Interesting change in drummers between the two sets. Hamid Drake on the Okka vs Paal Nilssen-Love on this one.