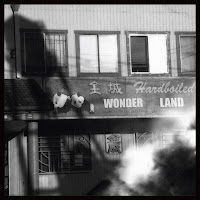 I've been listening to this album for a while now, finding it so immensely rich that I thought I would do it insufficient credit by already reviewing it. So I listened again, and again, and again.

Even if totally improvised, the music sounds very structured, with themes and angles of attack coming and going, shifting in layers and floating forward quite coherently, despite the incessant changes. It all sounds like the long intro to something that it still coming, but it's there already, right in front of your ears. It does not sound like jazz at all, influenced by some notions of 20th century classical music, yet at the same time it is accessible and lyrical, and totally free.

The initiator and band leader is drummer Vijay Anderson, actually bringing together the two regular trios he plays in : Sheldon brown on saxes, Ben Goldberg on clarinet, Ava Mendoza and John Finkbeiner on guitars, and Smith Dobson V on vibes. Interestingly enough, both Anderson and Finkbeiner also are part of Lisa Mezzacappa's Bait & Switch.

The band's coherence is, as said, astonishing. They move forward like a shoal of fish, all together yet without a clear path, and remaining a single body, rather than an entanglement of clashing sounds. The line-up changes regularly, always in the same vein, a little raw and light-footed. And even if all the voices are there at one moment or the other, there is no real soloing to speak of, but rather a joint creation of a sonoric totality.

Actually, the overall tone of the music fits well with the title, a reference to a novel by one of my favorite authors, Haruki Murakami. The Japanese author is, apart from being a jazz fan, the master of describing ordinary life, but beyond his perfectly normal characters, the mystery hides, not even magically, but as a presence in the subconscious, or in nature, or in evil. Check him out, you won't be disappointed.

The same effect is generated here : wonder and surprise are created with limited means : there is no shouting, no special effects, no clashes or crescendi or climaxes: what you get is a slow evolution of elements that all together create something new and eery. Lighfooted and menacing.

Great tension is the result. Great listening too!