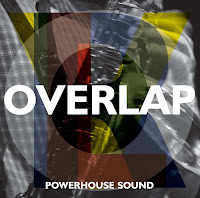 The second album by Powerhouse sound brings several tracks of the first album : "New Dirt", "Coxsonne", "Acid Scratch", "2-1-75", "Shocklee", "Exit Salida". Actually, only "Broken Numbers" is a new track, penned for the band in 2007, properly rehearsed, and with two versions on this album. This repetition with their debut album more than explains the album's title.

Powerhouse Sound is Ken Vandermark on saxophones, Jeff Parker on guitar, Nate McBride on bass and electronics, and John Herndon on drums.

I think the album is much better than the first one: it has the same rhythmic power with McBride and Herndon making the music an absolute fun and funky joy. As we all know, Vandermark is a great improviser on funky beats, and he does not disappoint us here. Parker is excellent, from the raw noise to rock-like bridges, reggae touches, jazzy and rock soloing, with wah-wah and all, sometimes all in the same piece, as on "Exit Salida". Together with the electronics, Parker is a kind of jamming station for the overall sound, at times breaking the rhythms and the tempo, adding abrasive touches to smooth surfaces, adding doses of toxicity, which by itself are sometimes off-putting but when the quartet picks up the compelling rhythmic musical power out of the debris, you want to jump up and dance.

Despite the overlap, this is an easy album to recommend. If you like great rhythms, high energy playing and raw power, brought by excellent musicians, then look no further.

Watch the band with "Coxsonne" some years ago

I don't find this, ¿is a CD or vinyl?
http://oscuraeralanoche.blogspot.com

Sorry, I should have mentioned it : it's a double vinyl album.

I don’t want to start any vinyl vs cd war
But honestly, music on vinyl irritates me. Why? First of all vinyls are much more difficult to obtain, much more expensive, requires turntable to play. I personally don't like the sound of vinyl (but this is very personal and debatable)
Powerhouse LP release is very typical. You can't even find any information about this particular recording, not to mention buying it.
My question is: who do they play and record for?
They play for themselves of course but also I hope for the public.
If I wanted to be sarcastic I would say: so they release 100 copies of vinyl recording, take 50 for friends and family and try to distribute another 50 between critics and some potential buyers?
What is the purpose?
Sound, antipiracy, elitism, being fashionable, cover art, nostalgia, money, not being heard, getting on peoples nerves ?
What do you guys think ?

The last Harris Eisenstadt vinyl on NoBusiness is another good example, and maybe is the best album of year!

Great to see a second powerhouse sound record but the same tunes again? basically for the third time. Still, nice to know they released a new album

I'm a fan of vinyl (because of the sound, the format, the artwork that comes with it, and various sentimental reasons), but i can understand that it often comes with a few frustrations.

tiny labels only do limited amounts (so that's definitely gonna raise the price a few euros/dollars), plus they usually don't have decent distribution options, meaning that you won't find it in the stores.

what several labels do nowadays, is include a download coupon with the LP, which i think is a good thing (you can put it on the computer and/or burn a cd copy for personal use), and should be done more often. some labels even add a cd to the lp package

ordering online usually involves an extra cost + there's always the risk that the LP, because of its fragility, is damaged on the way to your mailbox/front door.

what a label that puts out these records should do, is AT LEAST have a decent website w/ information and ordering options (the no business one is a good example), but i can't find any website for laurence family. anyone?

ps: agreed on the harris eisenstadt album -it is great!

Well, I think that Laurence Family's website is still under construction. But the album can be ordered here:
http://www.multikulti.com/go/_info/?id=31280

Personally I'm not a huge fan of lp's. I have a decent cd's collection and I haven't seen a point in turning into lp's. But unfortunately for me there is a growing number od lp's in the market. Lots of them is very interesting, many independent jazz labels decided to switch into lp's so maybe I will have to invest in turntable. At least lp is better than downloads...
Best regards,
Przemek

I like this one, too. But the idea, the rhythm, the songs. Everything was already on the first disc.

I can agree with four stars for this album becouse they repeat some old tunes, however they sound different, more bright and optimistic. Ealier the music of Powerhouse Sound seemed to me dark and misterious, now there is more joy. Laurence family has it's own blog, but it's in polish - http://laurence-family.blogspot.com/. And the first released double vinyl Tim Daisy / Ken Vandermark "Light On The Wall" is simply genius.
I get the point with vinyls. I don't understand them either. I prefer cd's and mp3 and I visit my friends to listen to vinyls. Maybe the labels turn into vinyls becouse it's harder to copy them.

What's the point of the vinyl? What about because this is a piece of "art"?
In fact I know (I heard this from the "horse mouth") that Ken V does not even own vinyl record player. I also witnessed conversation between some very talented European musician and leading European free jazz label when Mr. Artist was trying to convince The Label to release his album on vinyl. But there was a twist - he wanted to print only 300 copies and personally scratch all the records to make sure that nobody will ever be able to listen to the audio. After that all vinyls would be (of course) carefully packaged in expensive boxes, preferably made from the wood so the albums inside will be well protected, and offered for sale. Price point - few hundred dollars a pop. What's the point? I do not know, but I am an accountant not an artist so I am always happy it there is actually a music on the vinyls I buy and keep my mouth shut... " )