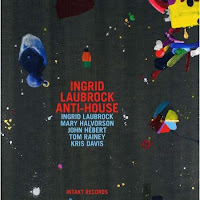 One of my main comments on saxophonist Ingrid Laubrock's excellent previous album "Sleepthief", was that it was too short. I really appreciated the broad expansiveness of her improvisations and the time she took to develop her ideas.

On this album, she does the exact opposite: you get fourteen compositions that are each in an almost totally different musical universe, ranging from the raw and abrasive punk-attitude ("Big Bang"), over fun tracks (like "Funhouse Clockwork") to more intimate pieces ("Tex & Clementine"), or carefully crafted little musical pastries ("Messy Minimum"). And you get an overview of jazz history from swing over fusion to Zorn and avant-garde, playing with volume, speed and sonic changes throughout.

She is accompanied by Mary Halvorson on guitar, John Hébert on bass, and Tom Rainey on drums, and glockenspiel. Kris Davis joins on piano for half the tracks.

Each track is a kind of musical capsule, existing in its own right, and following its own logic. Even the short ones can include several twists and truns, taking the listener wrong-footed at more than one occasion. Despite the incredible variation and wealth of ideas, the overall sound is still coherent.

Not only Laubrock's musical insights, but also the other musicians contribute to this result : Halvorson's guitar can be gentle and subtle, or incredibly violent, Hébert is as nuanced and versatile as I mentioned in earlier reviews, and so is Rainey, still one of my favorite drummers.

Despite all this, and despite the album's obvious inherent qualities, it's not one I would play as often and with such eager sense of anticipation as "Sleepthief". It is a nice exercise in updating various styles, and therefore maybe a little too programmatic, leading to a less obvious rapport with the listener (at least this one) than on her emotional and expansive predecessor.

Watch the band perform in August of this year

You better be right on this one. After Sleep thief and Paradoxical Frog I can't see how this can fail. This record is generally disliked among reviewers. Gives me even a better reason to buy it. I admit I am fan. This might turn into a years greatest dilemma: great artist making a bad record. I she overrated?

I also love Paradoxical Frog; I think it's one of this year's best. However, I was disappointed in what I've heard of Anti-House. It seems to be a real missed opportunity given the talents of everyone involved. I think I'm going to go with Saturn Sings (Tomas Fujiwara's Actionspeak is another album in that vein, also with Halvorson).