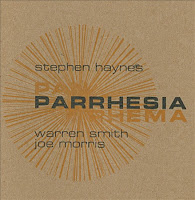 Trumpeter Stephen Haynes is a great fan of the late Bill Dixon (like me), and that can be heard on this free improvisation with Joe Morris on guitar and Warren Smith on drums and vibes.

The music is calm and exploratory, as you might expect, with a lot of attention to sonic details and the creation of an unusual atmosphere, that holds the middle between meditative calm and restrained energy, which leads to a great paradoxical tension.

For all three musicians, slowness in the delivery leads to precision and great interaction, and that includes Joe Morris, here often limiting himself to his bass strings, which at times gives more the impression that he's playing bass. Especially on the first track, one gets the impression to hear an arco bass, rather than a guitar. And when he plays on all six strings, as in "Quietude" or "Unfolding", the result is fantastic.

This is also a musical environment in which Smith feels as free as a fish in the ocean or as a bird in the sky, using his broad pallette of percussive sounds and ideas to complement and interact, more interested in coloring and emphasising than in setting a rhythmic base.

As the leader of the trio, Haynes determines the overall sound : wailing, growling, weeping - muted or voiced - with a high level of abstraction, but like Dixon with a deep emotional and spiritual content, one that can only be achieved once the barriers of form are overcome. This is illustrated on all tracks, but expecially on "Unfolding" which is of a staggering beauty and depth, with Morris's guitar adding an eery warmth to Haynes' magnificent playing, with some phrases reminiscent of Lester Bowie, but mainly being himself.

The ttitle of the album is well chosen, and can be explained by the definition by the French philosopher Michel Foucault : "More precisely, parrhesia is a verbal activity in which a speaker expresses his personal relationship to truth, and risks his life because he recognizes truth-telling as a duty to improve or help other people (as well as himself). In parrhesia, the speaker uses his freedom and chooses frankness instead of persuasion, truth instead of falsehood or silence, the risk of death instead of life and security, criticism instead of flattery, and moral duty instead of self-interest and moral apathy" (taken from Wikipedia).

The authenticity and courage required to do this, is what his music is indeed about. Warren Smith takes it a step further by reciting his poem "Yet And Still", but you all know I don't like spoken word on music, and it doesn't work well here either (the exalted tone, the lack of lyricism, the conflict with the music), even if it is one of the best pieces of the album.

But this shouldn't deter you : this is a truly strong and beautiful album. Recommended!

I love this record, too. Steven was on The Jazz Session last week talking about it. Here's the link:

Thanks for the wonderful (as always) review.

I am reading your notes here in Antwerp, having just finished chatting with Jacques Coursil over coffee. Tomorrow we (Jacques, Franz Koglmann, Barry Guy) will gather our collective musical spirits in rememberance of Bil Dixon at the Follow the Sound Festival.

It is a delight to read commentary that is just as nuanced and thoughtful as them music.

Hi Stephen,
Thank you for your reaction. I would have hoped to be able to come to the concert, but it's unfortunately not possible.