William Parker - I Plan To Stay A Believer/The Inside Songs Of Curtis Mayfield (AUM Fidelity, 2010) **½ 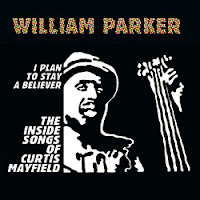 I usually review every new album on which William Parker plays, but I did not review "The Inside Songs Of Curtis Mayfield", released on the Italian RAI label, because I thought it was more soul than jazz, and hence not quite matching this blog's profile.

Now Parker is back on the same track, and I think a certain warning is in place for the fans. The first warning is that this is not all jazz, or not jazz at all. The second is that this is a compilation taken from various concerts at which the Curtis Mayfield songs were played, with big differences of approach and quality.

The record starts very strong though, with Leena Conquest on vocals, and the "established" William Parker band : William Parker on bass,Hamid Drake on drums, Lafayette Gilchrist on piano, Lewis Barnes on trumpet
Darryl Foster on tenor & soprano sax, Sabir Mateen on alto & tenor sax. In short, the band we love and enjoy. The playing and the singing are phenomenal, full of soul, funk even, energetic drive and great soloing. But it lasts only for two tracks.

Then you have Amiri Baraka on voice, on six tracks, talking rather than singing, and on those pieces the recording quality is lower, with the musicians being reduced to a supporting role.

Then the whole thing completely collapses into cheap gospel when the children's choirs from either France or the New Life Tabernacle Generation Of Praise in New York take the lead vocals, with the band even more pushed into the background.

I can understand Parker's admiration for Curtis Mayfield, about his music and what he represented historically and socially. But I would have expected a more personal and creative angle: possibly Mayfield's material isn't strong enough to start with. It is too bland and could have been played by a zillion other village bands.

Watch an excerpt from the Vision Festival two years ago.

I agree that the most essential music on this release (especially for jazz fans) is to be found in the first two tracks (already 35 minutes of music!), but I also like the remainder a lot. Perhaps because I'm a soul ànd Mayfield fan. It is indeed more predictable, but I like the warmth and spirit of the performances, the political anger below and above the surface and the groove of the music. Sound quality is really uneven indeed (those first few songs sound terrific w/ headphones), but especially in the piece with the children's choir that ends the first CD, I found that the echoing, lo-fi sound was somehow appropriate, as if you were overhearing a gospel mass. I thought those parts (which are indeed not as much about the jazz and individual performances) were charming, heartwarming even, in their own sweet way.
Perhaps not a must hear for those who prefer the free excursions of Parker & co, but it's definitely worth checking out for Mayfield/soul-fans or those looking for an entrance into the world of Parker. Or something like that...

Stef, I love your site, but two and a half stars may turn off a lot of people who might otherwise love this record, one I feel is the best of the year.

Gospel isn't cheap, and Curtis Mayfield was a giant.

I think your right. THis music doesn't fit the site's profile.

Thanks for the comments. You are of course the ultimate judges of the music, and depending on the perspective you are of course right. I just think the differences in quality and music are too great on this album to give it a high rating. I have far too much esteem for William Parker's other work to put this album in the same high ranking.

Sorry but to say "possibly Mayfield's material isn't strong enough to start with. It is too bland and could have been played by a zillion other village bands" is one of the dumbest things I've ever read. Just stick to free jazz & refrain from commenting on pther musics you clearly don't appreciate or understand.