The ECM Catalogue - published in Japan 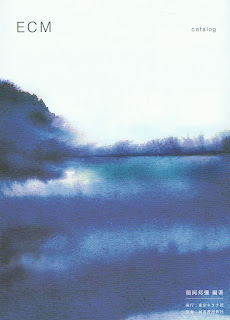 Many years ago ECM already published its catalogue in black & white, but now the Japanese distributor, Kenny Inaoka, edited the full catalogue at the occasion of the label's 40th anniversary in 2009.

Few record labels have managed to create such a distinctive market positioning as ECM did over the years, with carefully selected musicians, impeccable recording quality, superb art work and an overall refinement that set the label quite apart from many other jazz labels. ECM's positioning even affected the sound of the music, which under Manfred Eicher's production, often became very sophisticated and sometimes even somewhat sterile to the die-hard jazz fan, who would argue that the "soul" was taken out of the music, resulting in somewhat spacious neo-romantic impressionism, not the music to play in smoky bars, but rather in concert halls or churches.  That positioning was also reflected in the name "ECM-jazz", with special shelf space in the record stores next to the regular jazz section.

It is also no surprise that a significant part of the art work reflects that spaciousness, with pictures of horizons, of landscapes and seascapes, with lots of sky, especially in the eighties.

On the other hand nobody will deny that the label also has the "real jazz" and even historically significant ones, such as Old & New Dreams, Lester Bowie, George Lewis, Dave Holland, Art Ensemble Of Chicago. ECM also started looking beyond jazz, adding world music and new age elements to the catalogue, but without straying away from jazz totally, think of musician such as Shankar, or the great collaboration of Jan Garbarek with Usted Fatih Ali Khan, or the introduction of Tunesian oud player Anouar Brahem to broader audiences. He did the same for more rock-influenced musicians such as Terje Rypdal, Nils Petter Molvaer or David Torn, creating a dynamic of musicians who had never met before but who were brought together by Eicher's vision.

I am also sure that Eicher helped a number of musicians to become a lot better than they would have been in different cirumstances and with different producers. Without a doubt the best work by Tomasz Stanko and Enrico Rava is to be found on the label. But just also think about the many names of fantastic artists who would have remained in total obscurity outside their native country, if it had not been for Eicher's excellent ear for quality, regardless of genre : think of musicians like Egberto Gismonti, Eleni Karaindrou, Dino Saluzzi, Trygve Seim, Kim Kashkashian.

The catalogue counts more than 700 pages and includes all of the officially released albums issued on ECM - and its subsidiary JAPO - from 1969 until 2010.

The first section of the book has six covers per page in full color, in chronological order, the second section gives details for each album: musicians, composers, track titles, recording and production details. This part also has succinct reviews in Japanese of each album.

The last section is a very useful alphabetical index by title and by musician, which makes it possible for instance to easily find all the albums on which Jack DeJohnette contributes.

This is an extremely interesting and nice-to-have book, very carefully assembled. Fans of ECM will surely love this catalogue. It is perfectly readable and enjoyable to those of us who don't read Japanese, but a complete English version would of course be welcome too.

It can be purchased from ECM.

ECM basically introduced me to jazz, with Abercrombie's "Timeless" and Jack DeJohnette's "New Directions" being the first albums, then it quickly turned into an addiction. I was mesmerised by the sound and the art work, by the total package actually, walking to the store every week to spend my savings on the new albums, returning quite disappointed if there was nothing new. I bought without even knowing what the music would sound like, actually a great way of learning new things - and to loose a lot of money. There are albums I listened to no more than once or twice, but others that I listened to over and over and over, with the Don Cherry albums being my absolute favorite, followed by the Keith Jarrett quartets. 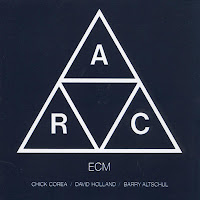 When young myself, I met an 18-year old girl (beautiful, intelligent, cultured, sporting, friendly, warm-hearted, open-minded) who owned - so I discovered - and listened to this wild abstract album by Chick Corea, Dave Holland & Barry Altschul. Do you know 18-year olds who listen to this kind of music? I married her. She's still my wife.

On the artwork of some albums : 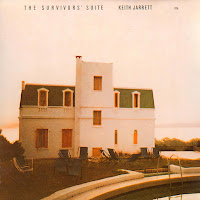 I have always been baffled by the photo of this phenomenal album by Keith Jarrett. The picture was made by Jarrett himself. It has this eery look of desolation in open space: closed shutters, empty chairs, empty swimming pool, full of contradiction, while being quite normal at the same time. The photo also has this yellowy and misty sheen over it, at sundown. Strange ... 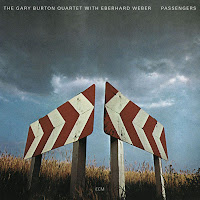 The picture on this album by Gary Burton is by Roberto Masotti. It is typically ECM: lots of sky, somewhat threatening and dark, with a horizontal line, and then a man-made element full of color in contrast. Absolutely beautiful, and 100% ECM. 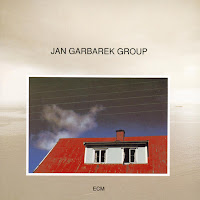 So is this one by Jan Garbarek, officially called "Photo With Blue Sky, White Cloud, Wires, Windows and a Red Roof", the only album in which the title actually refers to the picture, this one made by Eberhard Grames. 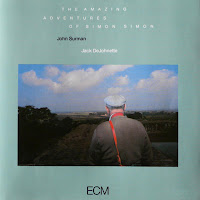 Or what about this one by John Surman : "The Amazing Adventures Of Simon Simon" : who is this man? why the double name? Again, horizon and sky? Why the picture taken from the back with a flash? The same concept of person photographed from the back is on another John Surman album "Withholding Patterns", but also on David Darling's "Cycles", but now I see that all three pictures are made by Christian Voigt. 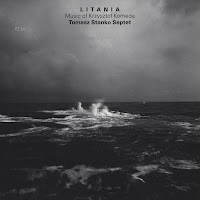 This is a perfect picture for the album : dark and romantic like the music by Krzistof Komeda as interpreted by Tomasz Stanko, like a nightmarish dive into the deep universal unconscious sucked up by waves that appear to be inescapable, exploding almost in the middle of the dark expanse. 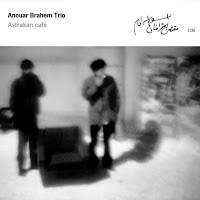 In the 90s and 00s, the pictures turn black and equally hard to place. Here on Anouar Brahems's "Astrakn Café", the picture is completely fuzzy with two men of which the one with the (astrakan?) hat is clearly smoking. Had you seen pictures like this before on album covers? 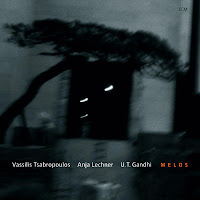 The ECM art work becomes black and white with a bluish shade : it cannot get any artsier, as illustrated by this album by Vasilis Tsabropolous. 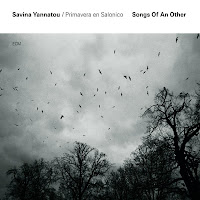 Again, just for the sheer beauty and gloomy romanticism : it is all about sky and vastness, often cold, like here with trees without leaves, with the freedom of the birds frozen in the sky. Yet the aesthetic, like in the music is undeniable and of a very specific high level. Album here is "Songs Of Another" by Savina Yanatou.

With a doubt the most used image is that of the sea, possibly the best metaphor for the nature of a lot of ECM's music - expansive, spacious, beautiful. 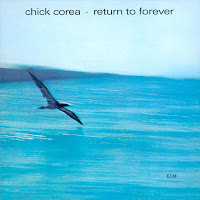 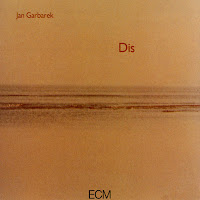 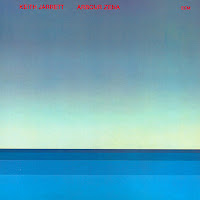 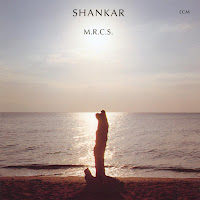 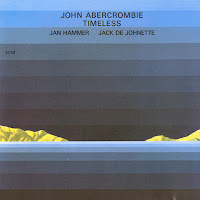 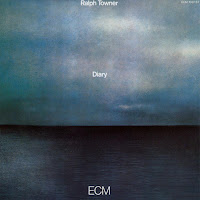 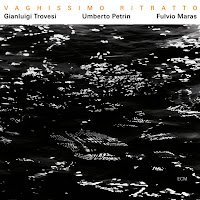 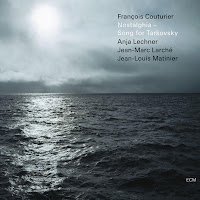 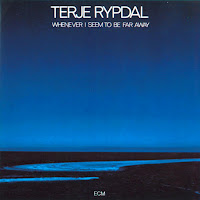 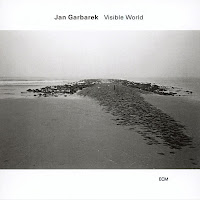 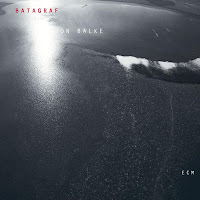 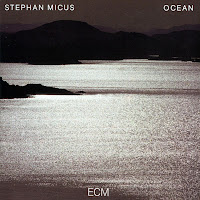 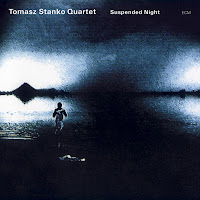 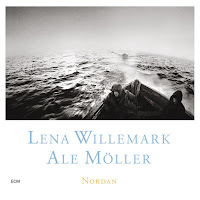 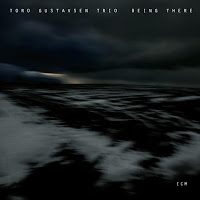 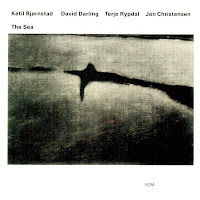 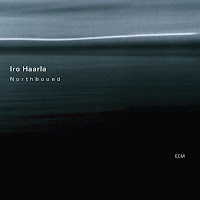 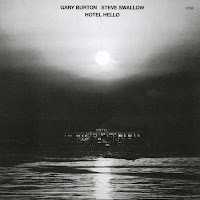 Wonderful post, and very recognizable: I have been an enthusiastic fan of ECM since I was 17, and 30 years later, I still listen to what the label has to offer. Though I never met a girl who loves ECM...
And I definitely prefer the covers of the seventies and eighties. It's a bit too dark these days, isnt'it?
The cover of Survivors Suite indeed is very special. This record - too often overlooked - is one of the highlights in Jarretts career. Paul Motian never sounded better than on that cd!
Peter

While most 'merikans get all weepy eyed over their Ted Nugent lp's, i found myself wondering this morning just where certain of my highly formative ECM LP's had gotten to..thanks Stef... like a certain German record company owner..your blog has the goods on a consistent basis as well.

This was great fun, Stef. Many thanks.

I still love Jarrett and DeJohnette's "Ruta and Daitya" (ECM 1021, in it's original presentation). Why have ECM blanded it out on the CD release, so that it now looks like a brown paper bag? Tell me, please, I want to know. Is it a comment on commodification, as was ECM 1005 by The Music Improvisation Company?

Still, it's my fault - I sold the original in a frenzy of Year Zero punk fanaticism. What an idiot.