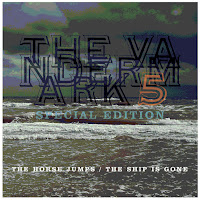 In truth, this is a Vandermark 7 release, with the latest line-up of the band, with Ken Vandermark on tenor saxophone and Bb clarinet, Tim Daisy on drums, Kent Kessler on bass, Fred Lonberg-Holm on cello, and Dave Rempis on alto and baritone saxophone being joined by Magnus Broo on trumpet and Håvard Wiik on piano, the latter two known from their work with "Atomic".

The album captures the band's performance at the Green Mill in Chicago in June of last year, and that "live" aspect makes the playing a little more relaxed and open, and offers more time for soloing than the usual tight playing of the Vandermark 5 on their studio releases, but the drive and energy level are of the same high level.

The song list reads like a "greatest hits" by the band, with  "Friction" and "Desireless" coming from Beat Reader , "Some Not All" from Discontinuous Line, and not less then four compositions - "Second Marker", "Cadmium Orange", "Cement" and "Early Color" - come from Annular Gift.

"Nameless", the closing track appears to be the only new composition. The selection of the pieces is also the right one, with the long and compelling themes, often with great boppish pulse, offering great improvisation space and possibilities for all musicians, with the reinforced horn section sounding more voluminous and powerful, and the piano adding a somewhat softer touch to the overall sound, like cream in coffee. The interaction between cello and bass works well in the live setting, as on the long intro to "Second Marker" or the cellist's piercing bowing in the grand finale of "Early Color". Lonberg-Holm's electronics is something of an acquired taste, but his use of it is relatively sparse and adds a kind of different flavor at times. Otherwise the music is incredibily exuberant, forceful, energetic, wild with the mastery of seven artists who know exactly what they do and how to do it.

The sound is heavier than on the studio albums, and the transitions between the improvisations and the return to the theme sometimes less seamless, but all that adds to the overall warmth, fun and participation possibilities of the listener, in the sense that it all sound so much more real, so full of the force of life itself.

And the playing itself, is so good, so good ...