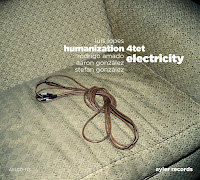 Two years ago, Portuguese guitarist Luís Lopes released his first CD, called "Humanization 4tet", which I liked a lot. Now the band is back, again with fellow Portuguese Rodrigo Amado on tenor sax, and the brothers Aaron and Stefan González on respectively bass and drums, with no changes in the line-up, ready to further explore the genre-melting approach of their music : jazz, rock, fusion and free elements intermingle.

All pieces are composed, with strong unison themes, often uptempo, full of unexpected turns and sudden changes. Even if it is Lopes project, this is now really a band, with all four members contribution to compositions and to the overall sound.

As said before, Lopes is a kind of "anti-guitarist", being of the fully functional kind rather than the guy in the forefront: his tone is low-toned and harsh, raw and direct but jazzy in its chords and solos. Amado's tone in contrast is warm and full-toned, yet rhythmic and powerful. Both González brothers form a fantastic rhythm section for this music, both combining the supple and versatile jazz approach with the directness of rock.

The album starts with the dark and menacing "Dehumanization Blues", an almost cinematic composition with lots of strong soloing. "Jungle Gymnastics" has indeed an acrobatic unison theme and uptempo drive, evolving into wild chaos in the middle part. "Two Girls" is more funky, starting with a solid sustained rhythm by bass and drums, over which sax and guitar play a nice strutting theme, evoking the title of the composition, with a light-footedness in strong contrast to the opening track.

"Efficy" is slow and more open-ended, with equally slow and sensitive soloing. Aaron González' other composition "Infidelities" sounds like the opener at the beginning, with slow but heavy beat, yet quickly changes into a more mid-tempo boppish mode, evolving into absolutely raw interplay between the electric guitar and the sax, again showing their infidelity to the proposed musical approach, and ending with another betrayal of a single feedback tone.

The last track is a long group improvisation, slowly progressing with close and intimate sax phrases evolving over raw but distant guitar sounds, and when you think the album has ended, there is a kind of bonus track, for those who have the patience to listen to silence for a minute and a half, again upbeat and boppish with funky touches, all rhythmic delight and fun playing.

The merging of styles is not a new thing, but the quality and the fun the musicians have with it transpires with every note and beat. But unlike many other endeavours, this one is very likeable for its straightforward approach and lack of pretence. It is art made human. Like a rock album, it should be listened to as a collection of songs rather than as a single unity.