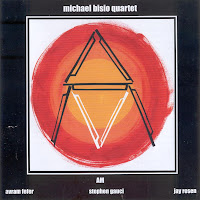 Sometimes it's hard to keep track of what's being released, even for the privileged ones like me, who get so much new material shoved into their lap.

This album by the Michael Bisio Quartet was released a year ago on CIMP, one of the labels whose output and promotions is quite unclear and irregular, but the band and the music are so good that I will still bring them to your attention.

The band has a double sax front line with Avram Fefer and Stephen Gauci, with Bisio on bass and Jay Rosen on drums. Regular readers will know that all four musicians are among my favorites, and you will find several reviews of all musicians elsewhere on this blog (use the search engine on the right). I will only refer back to "Circle This", because this album was recorded the morning after the recording of this other CIMP release, which explains the title.

The musical attitude is the same : free and adventurous explorations of sound and musical interaction, yet with a clear reference to jazz history. This is well illustrated by the second track "Can Opener", which sounds like actual free improvisation for almost seven minutes, when suddenly a soft and gentle theme emerges to close the piece. When you listen back to it, you come to understand obviously that the band was improvising on a theme that had not materialised yet. Fun and well-played.

Other tracks have a more standard opening, with clear theme and rhythmic base, leaving space for all four soloists to improvise. These improvisations often move into musical lightness of duos or trio interactions, keeping the warm density of the quartet to the theme itself. Coltrane's "Seraphic Light" is slow with measured horns and Bisio on arco, the latter unfortunately a little too much in the background to be well heard (as on the opening track).

The album ends with "Melodious T", a tribute to Monk, it is more boppish and traditional, but the playing is so good, that it's another delight. What an incredible tribute to jazz itself!

The music is warm, soulful, welcoming, gentle and sophisticated. Its lightness of texture is possibly its most specific characteristic, but then one combined with deep feelings.

What more do you want?